Lok Sabha Elections 2019- "Results Will Be In Favour Of Congress, Rahul Will Be Next PM": Ajay Maken

Elections 2019: Congress leader Ajay Maken met supporters ahead of the counting and said that they will form the government at the Centre. 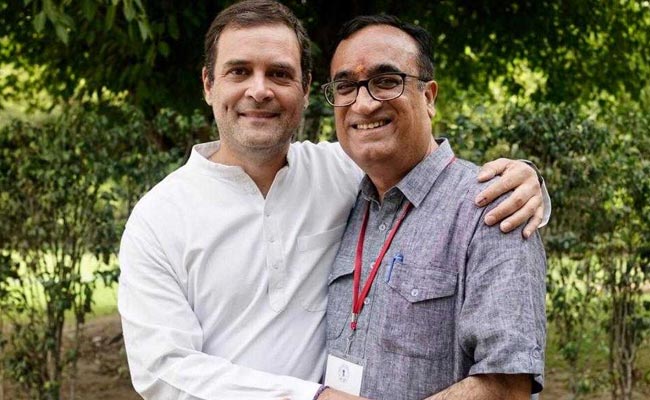 The Congress party candidate from New Delhi parliamentary constituency Ajay Maken today said that Rahul Gandhi will be the next prime minister of the country.

"The results will be definitely in favour of Congress. We are expecting that Congress will win and form the government. Rahul Gandhi will be the prime minister. The fight in Delhi is between BJP and Congress," said Ajay Maken.

Pitted against BJP's Meenakshi Lekhi, Mr Maken is eyeing to wrestle back the New Delhi Lok Sabha seat, which he lost to Ms Lekhi in 2014 general elections.

The Congress leader met supporters at his office ahead of the counting and expressed confidence that his party will form the government at the Centre even as several exit polls predict victory for the Prime Minister Narendra Modi-led NDA government.

Recently 22 political parties moved Election Commission of India demanding counting of VVPAT slips before the counting of Electronic Voting Machine. The polling body, however, rejected the opposition parties' demand on the basis of the impracticability of its implementation and cited Supreme Court's order on the subject.

BJP's Meenakshi Lekhi called this demand of opposition as baseless.

"The opposition parties are nervous and that's why they are questioning the Electronic Voting Machines (EVMs). These voting machines led Aam Aadmi Party to victory in the Delhi assembly elections, Chandrababu Naidu in Andhra Pradesh elections and Mamata Banerjee in West Bengal polls," Ms Lekhi said.

The counting of votes in 542 Lok Sabha constituencies began on Thursday amidst tight security, capping a two-month long election process which witnessed high-octane campaigning and charges of tampering EVMs and violations of the model code of conduct.