Gautam Gambhir had denied any connection with the derogatory pamphlet on Atishi and attacked Delhi Chief Minister Arvind Kejriwal instead. 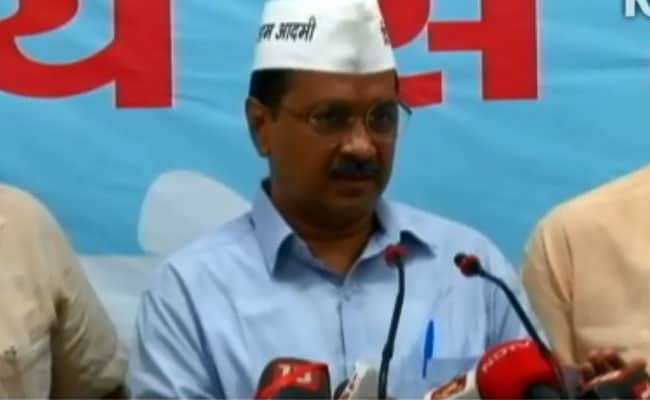 The tweet was sent in the aftermath of a row over a sexist and derogatory pamphlet, which AAP alleges was distributed by Mr Gambhir and targeted AAP leader Atishi - his rival for the Delhi East Lok Sabha seat.

Mr Gambhir, a cricketer-turned-politician, has denied any connection with the pamphlet and rattled off a series of aggressive messages on Twitter after it was made public at an AAP press conference hosted by Atishi and Deputy Chief Minister Manish Sisodia.

In his tweets, he targeted Mr Kejriwal and AAP over "outraging a woman's modesty".

I abhor your act of outraging a woman's modesty @ArvindKejriwal and that too your own colleague. And all this for winning elections? U r filth Mr CM and someone needs ur very own झाड़ू to clean ur dirty mind.

The AAP notice calls on Mr Gambhir to apologise immediately, in writing, for tweets that were "not only defamatory and motivated but also false, baseless, incorrect, unverified and misleading".

Speaking to NDTV, Mr Gambhir alleged AAP had circulated the pamphlets. "They have been the ones who distribute pamphlets. It has been there for a long time...tactics on how to malign someone's image. I'm sure none from BJP have ever been involved in something like this," he said.

However, he didn't explain on what basis he was accusing AAP of denigrating its own candidate.

"You noticees (three AAP leaders) are called upon to tender an unconditional and unqualified apology to our client for defaming him with the false and baseless allegations," the notice sent to AAP leaders by Mr Gambhir's counsel read.

Earlier, after revealing the shocking contents of the pamphlet, Atishi asked, "I have only one question for Gautam Gambhir. If he is doing this against one woman, what about the lakhs of women in east Delhi who are worried about their safety?"

Mr Kejriwal responded with a tweet that raised similar questions: "How can women expect safety if people with such mentality are voted in? Atishi, stay strong. I can imagine how difficult it must be for you. It is precisely this kind of forces we have to fight against."

Never imagined Gautam Gambhir to stoop so low. How can women expect safety if people wid such mentality are voted in?

Atishi, stay strong. I can imagine how difficult it must be for u. It is precisely this kind of forces we have to fight against. https://t.co/vcYObWNK6y

AAP and Mr Gambhir have engaged each other in an increasingly explosive war of words since the BJP gave the former cricketer a ticket to contest the 2019 Lok Sabha election.

Atishi has led the charge against Mr Gambhir so far, alleging he has voter ID cards from two different constituencies. The Election Commission rejected the complaint.

All seven of Delhi's Lok Sabha seats, which are all currently held by the BJP, vote on May 12, during the sixth of this seven-phase general election, with results to be declared on May 23.