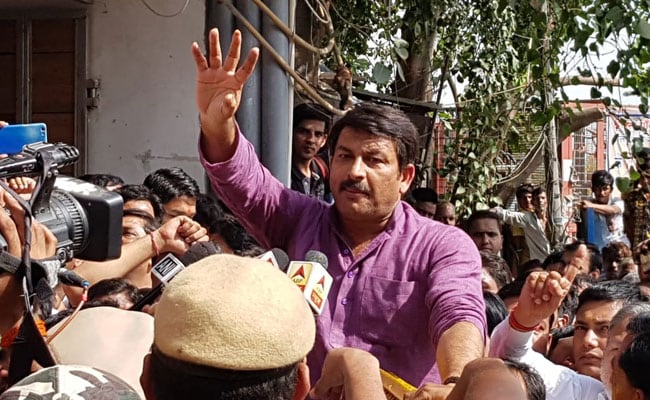 BJP candidate for Delhi North East Lok Sabha seat Manoj Tiwari had an indignant reply today for Delhi Chief Minister Arvind Kejriwal over his "naachta bahaut acha hai" remark, which he claimed had insulted the people of his constituency.

The back and forth began on Friday when Mr Kejriwal addressed an election rally in Delhi's Badarpur region. He was campaigning for party candidate Dilip Pandey, who is contesting Delhi North East against Mr Tiwari, the incumbent. The Congress has fielded former chief minister Sheila Dixit from the seat.

Annoyed by the Aam Aadmi Party (AAP) chief's statement, Mr Tiwari said, "By abusing me, he has directly insulted the people of ''Purvanchal'' and the same people will now show him what are the consequences of it".

Mr Kejirwal had earlier said, "Manoj Tiwari dances very well. Pandey-ji doesn't know how to dance. He knows how to work. This time give your votes for people who work, don't give it to people who dance".

He was referencing the BJP leader's cinematic past. Mr Tiwari was a popular Bhojpuri actor before making his political debut, with the Samajwadi Party, in the 2009 Lok Sabha polls.

Speaking to an enthusiastic and boisterous crowd, Mr Kejriwal had warned people against voting for candidates who had done no work for their constituents. He said, "See what work your MP has done in the constituency. Vote for 'kaam' and not for 'naam'."

Mr Tiwari isn't the only big name from the entertainment industry at whom Mr Kejriwal has taken aim ni recent days. The AAP leader also had his say about another BJP candidate - Hans Raj Hans from the Delhi North West seat.

Mr Kejriwal accused the BJP of "importing" the singer, telling voters during a roadshow in Bawana today that, "By importing the singer the BJP is telling the people of North West Delhi that no backward class member is eligible to contest the elections from this area".

"He (Gugan Singh) is fighting for the people of North West Delhi. Elect him to make him stronger", he added.

All seven of Delhi's Lok Sabha seats go to polls on May 12 in the sixth phase of elections. Results will be declared on May 23.