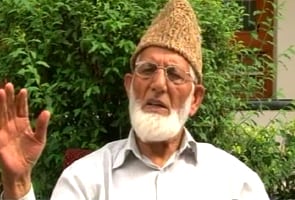 New Delhi: A shoe was thrown towards hardline Hurriyat leader Syed Ali Shah Geelani at a function in New Delhi on Thursday as a group of people staged a strong protest against his presence.

The protesters, shouting slogans like 'Bharat Mata Ki Jai' and 'Vande Mataram', created ruckus at the convention on Azaadi - The Only Way which was being attended by a number of sympathisers of Kashmiri separatists and Naxals. Though Geelani was yet to speak, more than 70 protesters shouted slogans asking him to leave.

In the pandemonium, someone threw a shoe towards Geelani on the dais but it missed him. A human chain was immediately thrown around him on the dais by the security personnel and organisers to protect the leaders on the dais. The protesters were led out by the police.

At the time of the protest, SAR Geelani, a lecturer who was accused in the Parliament attack case but later set free, was speaking on the topic.