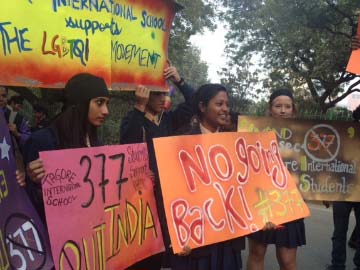 New Delhi: The Supreme Court today said that it will not review its controversial order that made gay sex criminal. The December verdict had drawn sharp criticism internationally for failing to protect fundamental individual rights.

The top court had  stated that only parliament could change the law, by deleting Section 377- a colonial-era statute of the Indian Penal Code which bans sex "against the order of nature"- is constitutionally valid.

The Centre and gay rights activists had appealed against the Supreme Court's decision. But judges today said they saw no reason to interfere with the order.

Now, the union government has two options: it can either file a curative petition in the Supreme Court, or it can try to amend the law in Parliament.

A curative petition, the final appeal in the legal process, is heard by the Supreme Court's senior-most judges including the Chief Justice of the country.

Amending the law in parliament will be tough for the government.  The main opposition party, the BJP, has said it backs Article 377.

The next parliament session, starting February 5, lasts 11 days, and is the last time Parliament will meet before the national election, due by May.

In 2009, the Delhi High Court exempted gay sex between consenting adults from the ban imposed by Section 377. That verdict was the result of a case brought by the Naz Foundation, a sexual rights organization, which fought a legal battle for almost a decade.

Different religious groups appealed against the Delhi High Court's decision in the Supreme Court, which ruled in their favour.

The Supreme Court bench, headed by G.S. Singhvi on his last day before retirement, found the High Court had overstepped its authority and that the law passed by the British in 1860 does not violate the Constitution.