Its redevelopment was conceptualised in 2016 as part of the railways' ambitious project to transform stations into world-class 24x7 transport and business hubs. 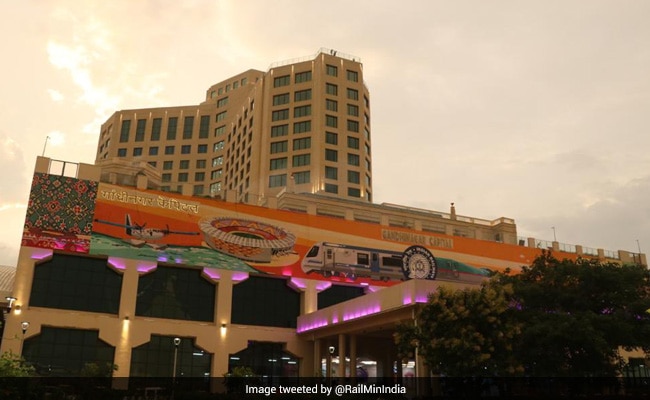 Prime Minister Narendra Modi will inaugurate the station on July 16.

The Gandhinagar Capital railway station, the country's first redeveloped station set to be inaugurated this week, will provide an airport-like experience to passengers with facilities such as a luxury hotel, theme-based lighting, an interfaith prayer hall and a separate baby feeding room, officials said Wednesday.

Prime Minister Narendra Modi will inaugurate the station on July 16.

Its redevelopment was conceptualised in 2016 as part of the railways' ambitious project to transform stations into world-class 24x7 transport and business hubs. These hubs are to be called "Railopolis" and aim offer great business opportunities and attract huge investments.

The officials said Wednesday the upgraded station has an interfaith prayer hall -- a first for the country's vast railway network -- a column-free, sleek and economical space frame spanning 105-meter over the platform with all-weather aluminium sheeting for the comfort of passengers. The roof is in the shape of an arch.

The structure is designed and provided with green building rating features and has already obtained sustainability standards green certification from the Associated Chambers of Commerce and Industry of India (ASSOCHAM).

"The station has been developed at par with airports for enhanced public satisfaction. We have tried to incorporate all the best facilities that our passengers require for a pleasant experience at a railway station," Railway Board Chairman Suneet Sharma said.

"In the project to redevelop stations, we are striving towards creating new sources of revenue for the railways as well new experiences for our passengers. It is truly a 'Naye Bharat ka naya station (new station of New India)'," he said.

The redevelopment work on the Gandhinagar Capital station started in 2017 with a joint venture named Gandhinagar Railway and Urban Development (GARUD) being formed.

The Special Purpose Vehicle (SPV) has 74:26 equity contribution from the Government of Gujarat (GoG) and the Indian Railway Stations Development Corporation (IRSDC), the nodal agency and the main project development agency (PDA) for such stations.

The project was envisioned with the Gujarat International Finance Tech (GIFT) city in focus which could emerge as a key international finance centre on the lines of other world famous cities.

In the near future, it is planned to open retail, food and entertainment outlets in the area for passengers as well as the local population, it said.

Market players such as Big Bazaar and Shopper's Stop have shown interest in opening their mini outlets at the station, the railways said, adding the redeveloped station will function like a "city centre rail mall" where travel will be one of the several functions.

The platforms are well connected through two subways with adequate seating capacity and two each of escalators and elevators, it said.

The station also has a luxury hotel on top of it. Spread across 7,400 square meters and built at a cost of Rs 790 crore, it has 318 rooms and is operated by a private entity, the railways said.

It is expected that national and international guests who would come to attend seminars and conferences at Mahatma Mandir, a convention centre situated just opposite the property, would stay at the hotel, it said.

As part of the larger redevelopment project, work on 125 stations is in progress. Out of these, the IRSDC is working on 63, and the RLDA (Rail Land Development Authority) on 60 with two other stations being taken up by railway zones, the national transporter said.

The total investment for the redevelopment of 123 stations along with real estate development is more than Rs 50,000 crore.