From Kingsway To Kartavya Path - The Journey Of India's Iconic Rajpath

Soon after independence, Kingsway was renamed Rajpath, and Queensway running perpendicular to it was rechristened as Janpath. 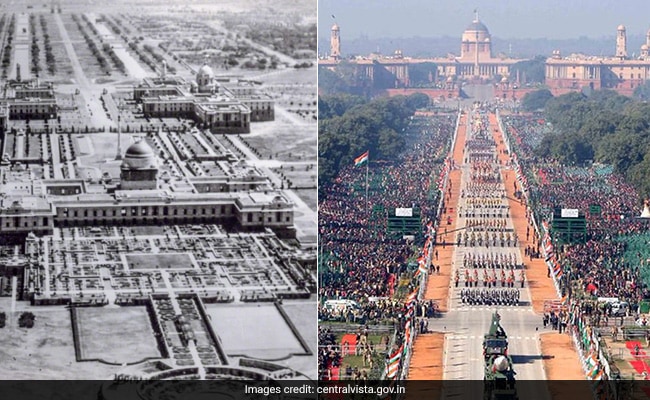 From witnessing the dawn of independence to playing host to annual Republic Day celebrations for over seven decades, the historic Rajpath in India's power capital has seen colonial rule and basked in the glory of a free, democratic nation.

The ceremonial boulevard of the national capital running from the Raisina Hill complex to India Gate began its journey as Kingsway, a majestic central axis in the heart of New Delhi that was built in New Delhi after the imperial seat of the administration was shifted from Calcutta (now Kolkata) as announced by British monarch King George V in 1911.

Soon after independence, Kingsway was renamed Rajpath, and Queensway running perpendicular to it was rechristened as Janpath.

Now, Rajpath has been renamed Kartavya Path and Prime Minister Narendra Modi on Thursday inaugurated the newly-christened stretch from Rashtrapati Bhavan to India Gate as part of the revamped Central Vista Avenue.

Kingsway or Rajpath was a "symbol of slavery" and it has now been consigned to history, Modi said after inaugurating the Kartavya Path, and also mentioned the king's statue that had occupied the canopy.

On December 15, 1911, King George V and his consort Queen Mary laid the foundation stone of the 'new capital' of the British Raj.

In consonance with the vision of the king, architects Sir Edwin Lutyens and Sir Herbert Baker built the new capital city, whose grandeur and architectural splendour rivaled the best of the cities in Europe and America.

The centerpiece of this new capital was the Raisina Hill complex, housing the majestic Viceroy's House (now Rashtrapati Bhavan) and North Block and South Block forming the Imperial Secretariat.

A grand axis was laid from the Great Place (later renamed Vijay Chowk) to India Gate by the architects with verdant lawns, fountains, and ornamental lampposts on both sides, forming the resplendent Central Vista Avenue.

Baker created a circular Parliament House near the Rashtrapati Bhavan which was inaugurated by the then Viceroy Lord Irwin in January 1927.

The city, constructed between the two World Wars and which took over 20 years to build, was inaugurated on February 13, 1931, by the same viceroy.

On India's Independence on August 15, 1947, the boulevard from Raisina Hill to India Gate was chock-a-block with people, welcoming the dawn of a free India which shook off the yoke of a long colonial rule.

India then became a Republic on January 26, 1950, and Rajpath has been the venue of all Republic Day celebrations since 1951.

The Rajpath and the Central Vista lawns flanking the promenade were officially renamed Kartavya Path, as the New Delhi Municipal Council (NDMC) approved the renaming and issued a public notice in this regard on Wednesday.

Union Minister of State for External Affairs and Culture Meenakshi Lekhi, who is also a member of the NDMC, on Wednesday said that Rajpath was known as Kingsway during British rule, while Janpath was known as Queensway.

"However, after 75 years of independence, it is felt that the name of Rajpath needs to be changed, in tune with the values and principles of democracy and a contemporary, new India. The Kartavya Path will also inspire everyone who visits or cross the road to perform their duties towards the country, the society, and their families," she said.

NDMC Vice Chairman Satish Upadhyay said the proposal was received from the Union Ministry of Housing and Urban Affairs (MoHUA).

The famed canopy, standing on four columns of the Delhi Order devised by Lutyens for the new capital's main buildings sitting on the Raisina Hill complex radially opposite the India Gate on a long and wide axis -- Rajpath, had been lying empty since the statue of King George V was removed in 1968 and later dumped at Coronation Park in northwest Delhi, ironically the site of the 1911 coronation durbar.

The imposing marble statue of King George V housed under an ornamental canopy facing India Gate was unveiled in 1939 by the then Viceroy Lord Linlithgow as a fitting memorial to the British monarch under whose reign the capital of 'New Delhi' was built, according to archival records.