From Cattle Herder To Schoolboy, This Lawmaker's Unique Protest In Parliament

From dressing up as a schoolboy, the Chittoor MP has even donned a sari as a part of the protest. 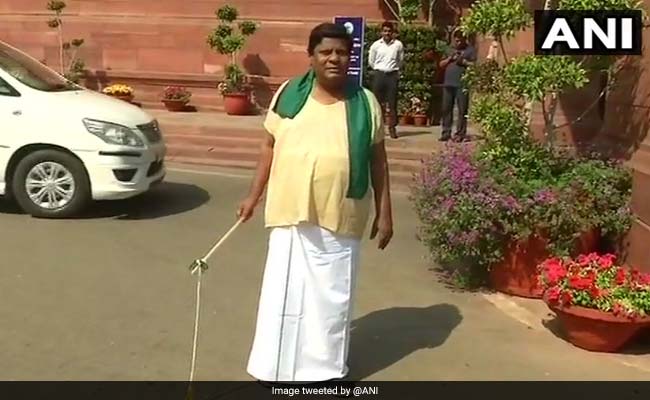 A doctor by profession, Mr Shiva Prasad has acted in movies too.

New Delhi: Telugu Desam Party (TDP) MP Naramalli Sivaprasad on Friday sported the look of cattle herder to protest against the denial of special category status to Andhra Pradesh, at the Parliament premises.

The protest that is taking place for a while now has been taken to a different level by Mr Sivaprasad, the TDP MP from Chittoor. With his creative costumes, he has been successful in grabbing the attention at least to himself, if not on the issue.

From dressing up as a schoolboy, the Chittoor MP has even donned a sari as a part of the protest.

On Thursday, Mr Siva Prasad dressed as a Swachh Bharat worker with a wiper in his hands, while on Monday the MP was seen dressed as a woman in a yellow sari and accused Prime Minister Narendra Modi of cheating the women of Andhra.

Last week, Mr Prasad wore shorts and carried a ruler with a notebook and said PM Modi has been the "bad student of the class".

Promoted
Listen to the latest songs, only on JioSaavn.com
A doctor by profession, Mr Shiva Prasad has acted in movies too. He became a lawmaker in 1999 and has served in Chandrababu Naidu's cabinet as a minister.

Meanwhile, Rajya Sabha has been adjourned till Monday after TDP MPs stormed into the well of the House over the demand of special status for Andhra Pradesh
Comments
Telugu Desam Party (TDP)Naramalli Sivaprasad