Paying tributes to the victims of the November 26, 2008 (26/11) Mumbai terror attack, Amit Shah said it is impossible to carry out such an attack under the watch of the Narendra Modi government 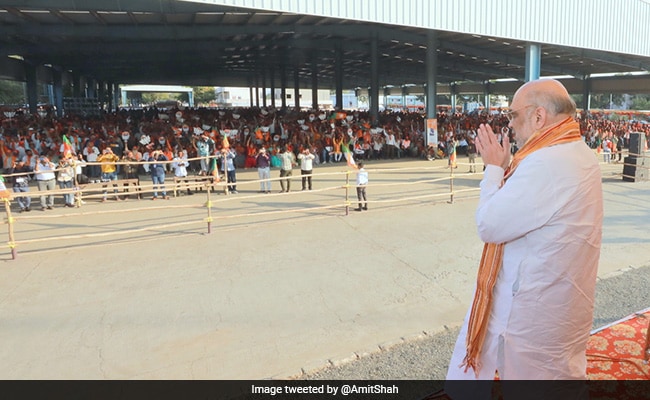 Union Home Minister Amit Shah on Saturday said terror attacks were rampant when Congress was in power and terrorists from Pakistan used to kill Indian soldiers but the then ruling party never condemned them due to "vote bank" politics.

Paying tributes to the victims of the November 26, 2008 (26/11) Mumbai terror attack, Shah said it is impossible to carry out such an attack under the watch of the Narendra Modi government.

"Today is the anniversary of the 26/11 attack. On this day (in 2008), Pakistani terrorists killed 164 persons in Mumbai. I pay my humble tributes to the departed souls. Though such attacks were rampant during the Congress rule, it is not possible to carry out a 26/11 type terror attack today because Narendra Modi is the prime minister," Shah said while addressing a poll rally in Talaja town in Bhavnagar district for a BJP candidate.

Voting on Talaja and 88 other seats will be held on December 1 in the first phase of the two-phase Gujarat Assembly elections.

"Sonia (Gandhi) and (former PM) Manmohan Singh were in power for ten years from 2004 till 2014. During their regime, terrorists from Pakistan used to enter India frequently and kill our soldiers and even decapitated their heads. Despite that, Congress never uttered a word. Why? Because of their vote bank. I hope you know who is Congress' vote bank," the senior Bharatiya Janata Party (BJP) leader said.

He added PM Modi gave a strong message to the world by carrying out surgical and air strikes on terrorists after Uri and Pulwama terror attacks.

The Gandhinagar MP also said the now-scrapped Article 370 (granting special status to Jammu and Kashmir) was the mistake of the first Prime Minister Jawaharlal Nehru.

"Didn't you want Article 370 (was supposed) to be removed from Jammu and Kashmir? For 70 years, these Congressmen preserved this Nehru's mistake as if it was a child. Our PM (Modi) removed it in one go in 2019 and made Kashmir an integral part of India in its true sense," he said.