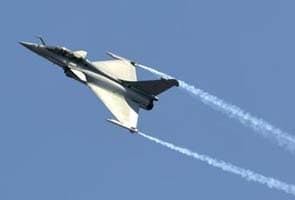 Paris: France expects to make its first deliveries of Rafale warplanes to India by 2016 or 2017, French Defence Minister Jean-Yves Le Drian was quoted as saying by financial daily Les Echos.

The paper said France's draft defence budget was based on an assumption that the first deliveries of the Dassault Aviation-built fighters would start in 2016.

Le Drian is set to go to New Delhi for talks about the contract, the paper said. India is negotiating to acquire 126 of the multi-role combat planes.

Indian sources told Reuters in April that the deal could be delayed as the two countries struggle to reach agreement over the role of an Indian state-run subcontractor.

Under the initial terms of the proposed deal, Dassault was expected to provide 18 Rafale fighter jets in "fly-away" condition, and then let the state-run Hindustan Aeronautics Limited  or HAL manufacture the rest in India.

However, Dassault now wants two separate contracts to be signed - one for the ready-made ones, and another for the rest to be built by HAL, but India opposes that proposal.

Dassault reportedly has concerns about whether HAL has the capacity and capability to assemble the aircraft and therefore wants to rope in other private Indian firms to manufacture the jets. Sources expect the kinks to be ironed out within the next six months.

Promoted
Listen to the latest songs, only on JioSaavn.com
India picked the Rafale for exclusive negotiations in January 2012 after a hotly contested bidding war with rival manufacturers, but is still to finalise the $15 billion deal, which would be one of the world's largest defence import orders.