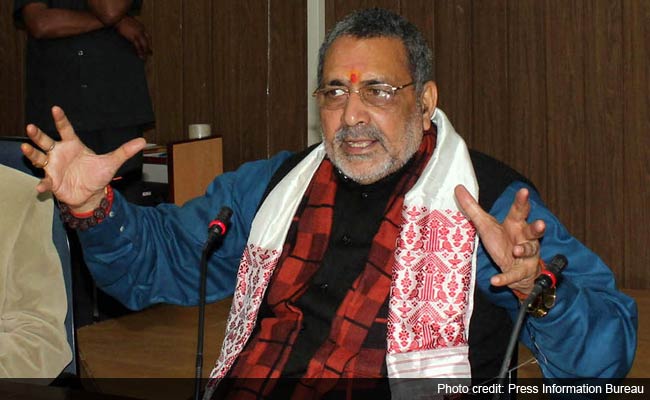 Union Minister and BJP leader Giriraj Singh was in Mumbai to review the progress of projects undertaken by his Ministry.

Mumbai: Union Minister and BJP leader Giriraj Singh on Sunday called for curbing "uncontrolled growth" of population through a uniform policy for all Indians and said time has come to redefine the meaning of "minority".

"The aim of four-sided development can be achieved only when the population of our country is in control. If America, Japan, China could achieve the desired pace of growth, it was only because they put total control on growth rate of their population," he said.

There should be a common population policy, strictly applicable to all citizens, to maintain social harmony and achieve all-around growth, the Minister of State for Micro, Small and Medium Enterprises said.

Mr Singh was in Mumbai to review the progress of projects undertaken by his Ministry.

Speaking to select media persons, he said, "Time has come when meaning of minority ought to be redefined, keeping in mind their population in respective localities."

"It has been over 68 years since India got freedom, and now time has come when we should clearly lay down parameters to call a particular community minority," he said.

"There are several villages, blocks, tehsils, districts, where over 70 per cent the population belongs to a particular community, but they enjoy minority status. This should be done away with," said Minister.

"We may launch mammoth infrastructure projects, but by the time these are executed, population explosion would nullify their objectives," the Lok Sabha lawmaker from Bihar said.

"I want to emphasise very categorically that till we chalk out and execute plans for controlled growth of population, no real development can take place," he said.

Asked whether he would be put forth population policy issue at the party forum or BJP lawmakers would bring a private Bill, he said, "I am a Minister, so I cannot bring a private Bill. But in my personal capacity, I want to start a debate nationwide on this burning issue as it (population explosion) is an impediment in maintaining social amity and development."

The BJP leader slammed Congress for its conduct during the just-concluded Winter Session of Parliament and said its "most unfortunate" that we have an Opposition party like it.

The party (Congress) held Parliament "hostage" and tried to block the Narendra Modi's efforts to put the country on the fast track of development, he said.

"Congress should come forward and act as a constructive Opposition party. It should ask why the growth rate of GDP is 7.5 per cent and not 10 per cent? What benefits India would get by Modi's foreign visits? How much of FDI has come into the country?" Giriraj Singh said.

Instead of asking such questions, the Congress, unfortunately, is content with raising the issue of alleged rise in intolerance under the BJP-led government, the Union Minister added.