Former prime minister Atal Bihari Vajpayee was admitted to AIIMS on June 11 with a kidney tract infection, chest congestion and urine output on the lower side.

93-year-old Mr Vajpayee, who was India's 10th Prime Minister, was admitted to the hospital on June 11 with a kidney tract infection, chest congestion and urine output on the lower side.

The statement was issued hours after Prime Minister Narendra Modi visited AIIMS Wednesday evening to enquire about the condition of the former prime minister Atal Bihari Vajpayee who is undergoing treatment there.

PM Modi reached the hospital at around 7.15 pm and spent about 50 minutes there. This was PM Modi's fourth visit to Mr Vajpayee in AIIMS since he has been admitted.

"I have been praying to god that just once I can see him give a speech again. Our family can never ever erase that image of his from our minds. I hope he gets well soon," Mr Vajpayee's niece Kanti Mishra said.

The 1924 born leader is under the supervision of Dr Randeep Guleria, a pulmonologist and currently the Director of AIIMS. Dr Guleria has served as personal physician to Atal Bihari Vajpayee for over three decades.

A team of doctors from the nephrology, gastroenterology, pulmonology and cardiology departments is looking after the former Prime Minister, sources had said. 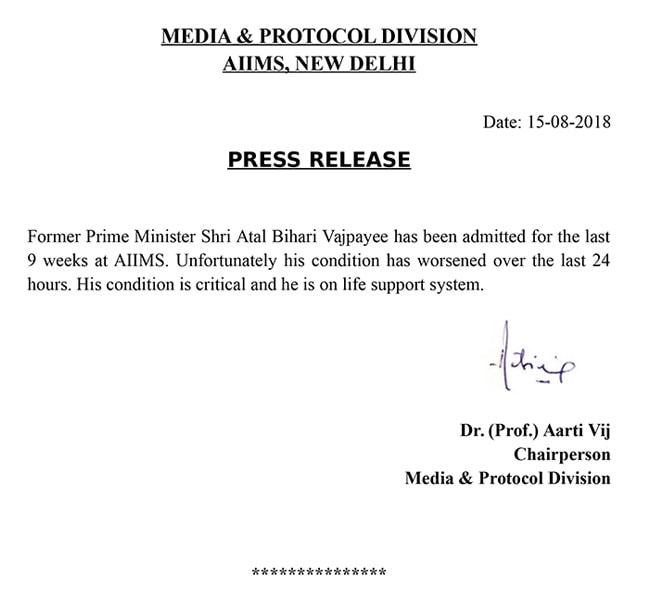 Atal Bihari Vajpayee was thrice elected the prime minister between 1996 and 1999 and is the only non-Congress prime minister to complete the full term of five years, from 1999 to 2004. As his health deteriorated, he had slowly withdrawn himself from public life and was confined to his residence for years.