Considering the current situation in the grand old party, there is "no scope" for working for the people, Former Congress MP Pradeep Majhi said. 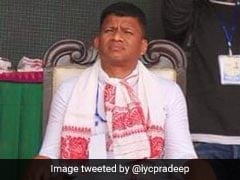 Former Congress MP from Odisha Pradeep Majhi, who had recently resigned from the party, on Sunday announced that he will join the ruling BJD, along with his supporters.

Considering the current situation in the grand old party, there is "no scope" for working for the people, he said.

"Along with my supporters, I will join the BJD led by Chief Minister Naveen Patnaik. He has a vision for the all-round development of the Koraput region," he told reporters.

The tribal leader, who was the working president of the state unit before he quit the party on October 22, said the Congress'' support base has "deteriorated significantly", and it will not come to power in Odisha in the near future.

The former Nabarangpur MP said he decided to switch over to the BJD as he wanted to work more for the people of backward districts of south Odisha. He is likely to join the ruling party on October 28, sources said.

He had lost the Lok Sabha elections in 2014 and 2019 as a Congress candidate.

Mr Majhi became the third leader to have deserted the Congress in recent times. Party's former Laxmipur MLA Kailash Kulesika and its ex-legislator from Kotpad Chandrasekhar Majhi had recently switched to the BJD.

His father Bhagaban Majhi was a supporter of Biju Patnaik and became a Rajya Sabha MP from the erstwhile Janata Dal. His grandfather Nilamber Majhi worked as a member of the Swatantra Party.

During the press conference, a large number of Majhi's supporters and several local leaders of the Congress from seven assembly segments - Malkangiri, Chitrokonda, Kotpad, Nabarangpur, Dabugam, Jharigam and Umerkote - resigned from the party.