For Pollution-Free Yamuna, Arvind Kejriwal In Seoul For Cleaning Lessons 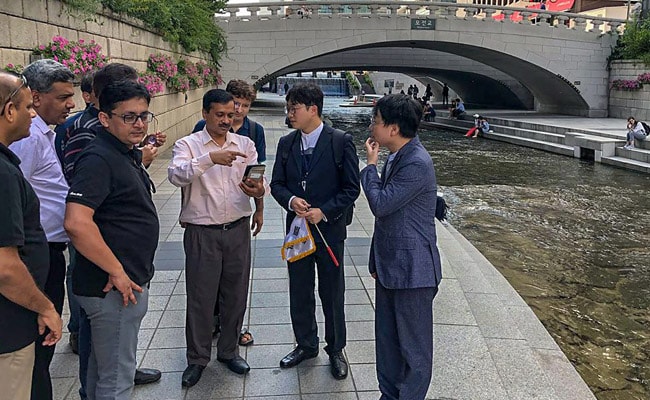 Delhi Chief Minister Arvind Kejriwal has visited Seoul's Cheonggyecheon stream that has been transformed from a polluted water body to a popular tourist spot, which his Aam Aadmi Party said can be an example for reviving the Yamuna River.

Mr Kejriwal also attended a leg of the ongoing India Festival in South Korea - 'Sarang 2018' at Yonsei University, and praised the Indian Embassy in Seoul for showcasing India's heritage to Koreans.

"I am extremely pleased to participate in this festival and happy that the embassy has taken initiatives to showcase India's culture to Korea... And, this music fest is being launched today. I am very pleased, and I am here to attend a conference, to sign an agreement between Seoul city and Delhi city," he said in his address.

Cheonggyecheon is an over 8 km-long stream flowing west to east through downtown Seoul, and then meeting Jungnangcheon, which connects to the Han River and empties into the Yellow Sea.

Several decades ago, Cheonggyecheon was an eyesore and the stream was covered with concrete for roads and even public transportation system was later built over it.

The Seoul Metropolitan Government undertook a restoration of the stream in 2005 and renewed it.

The Cheonggyecheon restoration project had the purpose of preserving the unique identity of the natural environment and the historic resources in the central business district of Seoul, and to reinforce the surrounding business area with information technology, international affairs and digital industries.

"CM @ArvindKejriwal is in Seoul for Twin City Agreement b/w Delhi & Seoul on Pollution, Water, Public Transport, Education & Urban Devp. If Cheonggyecheon stream in downtown Seoul can be regenerated to a tourist hotspot, why can't river Yamuna & drains in Delhi be revived ?" the party said.

A Carnatic music concert was also held at the Yonsei University on its 100th anniversary on Wednesday.