For India-Fiji Friendship, PM Modi Downed a Drink Prince Charles Had Balked At 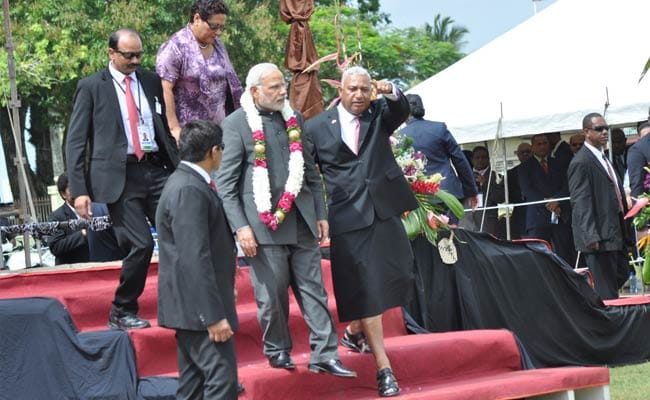 New Delhi: When Prime Minister Narendra Modi was presented a coconut shell cup with an "intoxicating" Fijian drink after an elaborate traditional welcome ritual performed by men wearing grass skirts in Suva last month, he did not hesitate but quaffed the contents in one straight gulp - as per local tradition.

Mr Modi was presented the yaqona or kava, a traditional non-alcoholic drink prepared from the pulverised root of a plant from the pepper family (Piper methysticum, Piper: Latin for "pepper", methysticum: Latinised Greek for "intoxicating"). The muddy-coloured liquid is said to have a tingly numbing effect on the tongue.

The yaqona ceremony has great significance in Fiji where old customs still prevail. Turning down an offer to drink a bowl of yaqona - that is said to have "narcotic effect" - is considered insulting in Fijian society.

As the men from the Fijian village of Sorokoba, of Ba province, bare-chested and dressed in long grass skirts performed the traditional yaqona welcome ceremony, singing all the while, on Nov 19 at the Albert Park, Modi sat through the elaborate ancient ritual.

He had landed a couple of hours earlier from a long flight from Australia, where he had spent five hectic days of diplomatic engagement, and was on the last leg of his three-nation tour, with the first stop having been to Myanmar. Mr Modi was the first Indian prime minister to visit the Pacific Ocean island nation in 33 years after former prime minister Indira Gandhi in 1981.

To first timers the yoqona drink can be unpleasant tasting. According to reports in The Telegraph, it tastes like "puddle water" or as one visitor described it a "cocktail of dirty washing water garnished with old socks".

Advised beforehand, Mr Modi accepted the drink proffered by the master of ceremonies, and without any change of expression gulped it down in one draught. The prime minister's quaffing of the drink was accompanied by much hand clapping.

After the ceremony, Fijian Prime Minister Voreqe Bainimarama gave a welcome speech, followed by a speech by Mr Modi.
Chinese President Xi Jinping, who visited Fiji two days after Mr Modi, was welcomed with a similar ceremony by the people of Nakorotubu villagein Ra province.

Yaqona is drunk by ethnic Fijians - known as iTaukei - and indo-Fijians, who make up around 37 per cent of Fiji's 827,900 people, as well as the other ethnicities that make up its populace.

According to a Fiji official site, the drinking of yaqona (pronounced Yangona) or kava, is a common ceremonial and social custom. The yaqona ceremony has great significance in Fijian life but is now considered a social drink as well as a ceremony.

Yaqona drinking is common in Fijian villages and it is quite normal to see groups of men gathered around the tanoa, or large wooden bowl, swapping stories as the bilo, a half coconut shell, is passed around with the drink.

There is a humorous story about the Prince of Wales who took part in a grand burau or (kava-drinking ceremony) at the village of Viseisei, near Nadi, in March 2005.

Prince Charles had just landed after a three-hour flight from New Zealand and was still dressed in his dark, double-breasted Saville Row suit. After the 90-minute ritual, the British royal was presented a "dish of kava, the mind-adjusting South Pacific drink".

"It is said to numb the lips and fuddle the brainwaves: in short, it boasts narcotic effects".

As Prince Charles was presented the "intoxicant", he "cautiously raised it to his lips and grimaced. It cannot be said with certainty whether he took a sip or a gulp; whether he was a polite social drinker or a kava lout," said a report in the Independent.

Promoted
Listen to the latest songs, only on JioSaavn.com
"He seemed suitably sedated after his 90-minute session, and in his thank-you speech got all his dates mixed up. The generous Fijians put it down to jet-lag rather than kava abuse," said the Telegraph.