Such was the magnetic appeal of Atal Bihari Vajpayee's persona that old-timers and youngsters travelled in scorching heat, some from far-off places to pay their last respects. 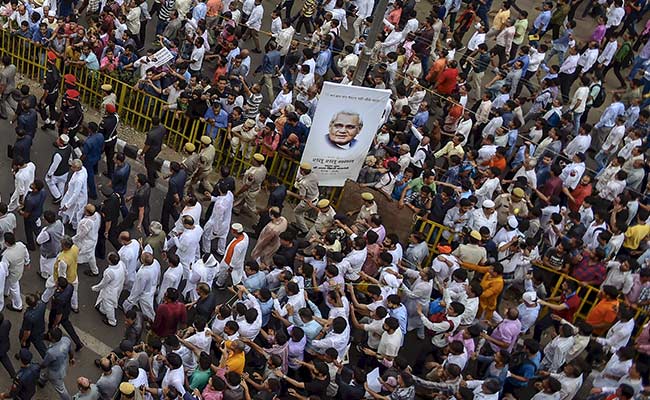 Electrician Kundan Kumar Jha skipped work and travelled from Faridabad yesterday to catch a glimpse of former prime minister Atal Bihari Vajpayee at the BJP headquarters, only because he loved his speeches and personality.

Such was the magnetic appeal of Mr Vajpayee's persona that old-timers and youngsters travelled in scorching heat, some from far-off places to pay their last respects.

Mr Jha, in his mid-30s, who originally hails from Bihar, said, he was an admirer of his personality back home only, but the admiration grew after he moved to Delhi.

"I work as an electrician with a private company in Faridabad. But, I decided to skip work yesterday, as I had to be here. I just had to pay my respect, so I came. Also, I liked his speeches and personality. Even in his sarcastic remarks, he was very dignified," he told PTI.

While Mr Jha endeavoured to catch a glimpse of the leader from a footpath beside the Deendayal Upadhyaya Marg, a few visitors perched on branches of trees opposite the party office to steal a look.

When asked, what drew him to Mr Vajpayee, he said, "His speeches were fiery and phenomenal. After moving to Delhi in 2011, I was introduced by my friends to his famous speeches. They were so powerful and had the idea of India that he had envisioned."

Mr Vajpayee's body was kept from morning till around 2 pm at the party headquarters, after which it was taken in a procession to the Rashtriya Smriti Sthal, where he was accorded a state funeral.

"Vajpayee ji is gone but his philosophy and message of life, many of which are reflected in his poetries, will live on," he said.

People from Bareilly, Aligarh and other parts of Uttar Pradesh had also come to pay their respects.

"I travelled with friends in a bus from Ambedkar Nagar (UP) and reached early morning to pay homage to Vajpayee ji," said Triveni Ram who had contested against BSP's Mayawati in the 2004 Lok Sabha election.

Ram remembered Mr Vajpayee joining his election campaign in Ambedkar Nagar and how he "cared" for party workers.

At the Rashtriya Smriti Sthal, Mr Vajpayee's mortal remains were consigned to flames in the evening.

The 93-year-old veteran politician died at the All India Institute of Medical Sciences (AIIMS) hospital last evening after prolonged illness.