For 2 Days, Ants Fed On Wounds Of Man Who Died In Chhattisgarh Hospital

The video accessed by NDTV showed the man on a hospital bed. He was given glucose intravenously

The hospital management has no information about the man's family or friends.

Ants fed on the wounds and bedsores of a 30-year-old man for two days before he died at a government hospital in Chhattisgarh. In a video accessed by NDTV, ants can be seen crawling on his bandaged arm. In an attempt to explain the disturbing sight, a doctor said there were ants everywhere because of the monsoon and "one or two" may have been on his arm, but he denied any negligence.

The man was found unconscious outside a primary health centre in Manendragarh on June 28, bleeding from his head. No one bothered to take him inside for treatment. When BJP lawmaker from Manendragarh Shyam Bihari Jaiswal intervened, the man was given initial treatment but was sent to a hospital about 50 km away in a government ambulance. The man had several injuries, the doctors said.

When the media got to know about the man, they reached the hospital and were horrified to find ants swarming over his wounds. A local human rights activist, who had informed them, said that ants fed on his wounds for at least two days. The patient was not in a position to speak. He died on Monday after staying in the hospital for 12 days. 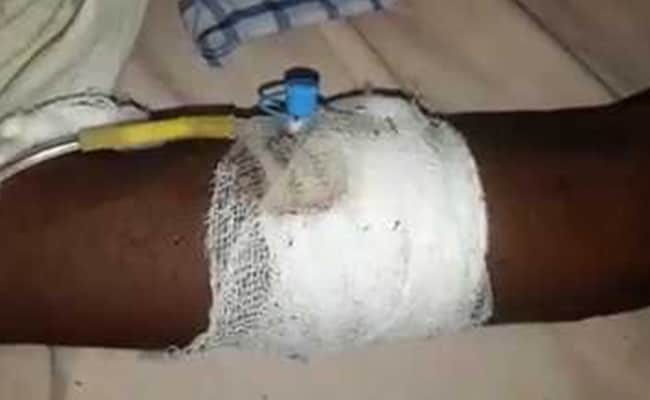 The ants could be seen crawling on his bandaged arm at the hospital.

The video showed the man on a hospital bed, being given glucose intravenously. Doctors at the hospital, denying that the patient was neglected, said the glucose could have attracted ants to his bedsores. They also said there were too many patients to focus on one.

The hospital management has no information about his family or friends.

Dr Mukesh Kumar Hela, a resident medical officer, said, "It's monsoon and ants are everywhere, even at our homes. There may have been one or two ants on his arm. There were no attendants and we are unable to pay too much attention to a single patient. We had given him glucose which is sweet in nature so the ants must have climbed the bed because of that. But there was no negligence on our part."

The police say they haven't received any complaint.