Flooded Assam Cancer Hospital Forced To Give Chemotherapy On Roads

Hospital staff and patients are appealing to the administration to provide motor boats and essential items for the hospital to continue functioning. 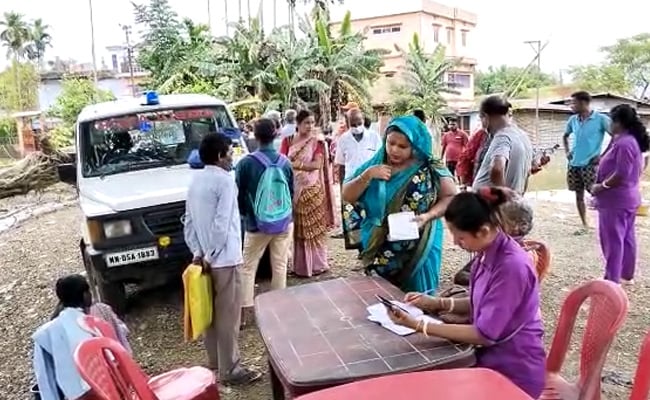 134 people have died due to the floods in Assam this year.

An inundated cancer hospital in flood-hit Assam is publicly appealing for funds and essentials after being inundated due to incessant rains. The 150-bed Cachar Cancer Hospital and Research Centre in Silchar has been forced to even administer chemotherapy on the road outside its premises as several hospital buildings are waterlogged and roads leading to it are also inaccessible without a boat.

Hospital staff and well-wishers are appealing to the administration to provide motor boats and essential items like food, fresh drinking water, diesel, life jackets and clothing for the hospital to continue functioning. In visuals from the spot, the hospital ambulance can be seen wading through water whenever possible and a makeshift raft made out of tyre tubes and wooden ply being used where water levels are high.

A proper raft is also being used to ferry staff and patients across the flooded roads.

Doctors from the hospital say the floods have been devastating and a lot of people from the administration and even the general public have been involved in relief work.

"We have patients so we can't stop treating them. We try to do the quicker procedures in the dry area across the hospital as we are scared of crossing the flooded roads on makeshift rafts. We draw blood and give outpatient care from here and send those who need longer procedures across to the hospital," one of the doctors said, adding that care is being taken to ensure the process is totally safe.

"Chemotherapy is being done inside the hospital and it's a three-hour procedure. Only some preparations like injections are given outside," the hospital's founder Padma Shri Awardee Dr Ravi Kannan told NDTV.

Eight more persons lost their lives in the devastating flood in Assam on Monday, while over 21 lakh people continued to remain in distress under the impact of the deluge, newsy agency ANI said quoting officials.

134 people have died due to the floods in Assam this year, with eight deaths reported just yesterday -- five from Cachar district and one each from Kamrup Metro, Morigaon, and Nagaon.

One person was also reported missing in the Cachar district, according to a bulletin of the Assam State Disaster Management Authority (ASDMA).