First Dreamliner for Air India to land on Saturday 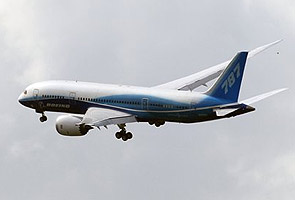 New Delhi: Air India's long wait for the Boeing 787 Dreamliner will soon be over, with the first of these long-haul planes set to arrive here on Saturday, sources said today.

The national carrier, which had placed orders for 27 of these aircraft six years ago, would get its first Dreamliner on Saturday, which is to be followed by the delivery of two more within the next few weeks.

However, the fate of the Delay Compensation Agreement, which was cleared by the Union Cabinet in August and is being fine-tuned by the Union Law Ministry, is still not clear, the sources said.

The agreement, supposed to be signed between the airline and Boeing, is to finalise the compensation to be given by the US aircraft major for almost four-year delay in deliveries.

The first batch was supposed to be delivered in September 2008 but design and production issues at Boeing delayed deliveries.

With these new aircraft, Air India, which intends to get 14 of them by March next year, would launch flights on several long-haul international sectors, including new services to Australia, later this year.

For the next few weeks, the Dreamliner would be operated on the domestic sectors, including Delhi-Mumbai, to enable the pilots and crew get accustomed to its landings and take-offs.

Air India was the second world carrier to have placed orders for this aircraft, but delay in clearing of the agreement further delayed the plane's deliveries to Air India.

Those airlines which have inducted and are already operating this aircraft are Japan's All Nippon Airways, Japan Airlines and Ethiopian Airways.

The plane is made of carbon composite material, which makes it light-weight and therefore is considered less fuel guzzler. Boeing claims the plane consumes 20 per cent less fuel compared with the similar-sized B-767s and better fuel efficiency implies lower flying costs.

According to Boeing, as many as 47 airlines across the world have ordered nearly 900 Dreamliners.

Promoted
Listen to the latest songs, only on JioSaavn.com
The long-range, twin-engine aircraft has four variants, with the longest-range variant capable of flying over 15,000 kms non-stop.