The situation is under control now, officials said, adding the fire trucks were called in after smoke was seen coming out from the building 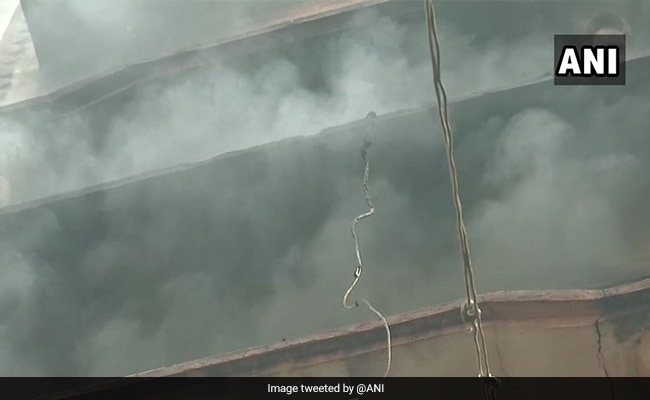 Delhi fire: Another fire broke out at the same building at Anaj Mandi where 43 died in blaze yesterday

Four fire trucks were sent to the same building in north Delhi where 43 people, mostly labourers, were killed in a blaze yesterday after smoke was seen billowing out from a balcony, the police said.

The building at the crowded Anaj Mandi on Rani Jhansi Road was built without proper clearances, the police have said, adding its two owners have been arrested.

The situation is under control now, officials said, adding the fire trucks were called in after smoke was seen coming out from the building.

On Sunday, a fire broke out just before dawn when most of the labourers were sleeping. The blaze rapidly engulfed the building, trapping the people. Many of them died due to suffocation, doctors at hospitals that received the bodies said.

The building located at a crowded place in Anaj Mandi on Rani Jhansi Road does not have clear safety passages. The labourers apparently lost precious time to escape since all of them were sleeping.

Fire department officials suspect a short circuit triggered the incident. The lanes are so narrow that fire trucks couldn't reach the building and had to be parked some distance away. Firemen made their way through the lanes to rescue those trapped inside the blackened building and carried away several unconscious labourers on their backs.

The case against the owners of the factory, Rehan and his brother Imran, will be probed by the Crime Branch of the Delhi Police.

The BJP in Delhi, Chief Minister Arvind Kejriwal and Prime Minister Narendra Modi gave their condolences to the families of those who died in the fire and also announced compensation up to Rs 10 lakh per family.