The governor, earlier in the day, hailed Prime Minister Narendra Modi for his "efforts to mitigate the woes of farmers" across the country and urged Chief Minister Mamata Banerjee to join the Centre's PM-Kisan scheme. 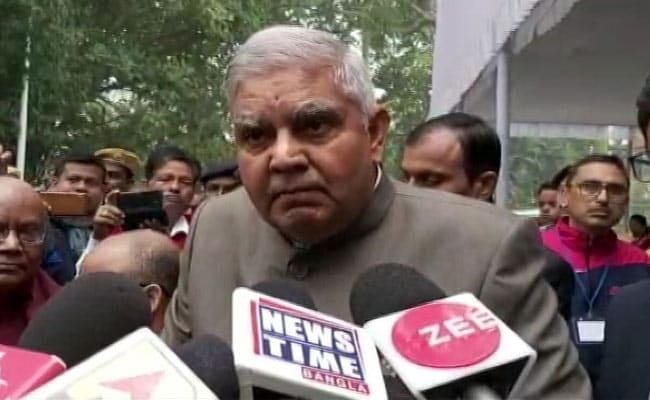 Hitting out at West Bengal Governor Jagdeep Dhankhar over his tweet praising the Centre's economic package, the TMC on Friday said he should contest the next state Assembly polls on a BJP ticket.

The governor, earlier in the day, hailed Prime Minister Narendra Modi for his "efforts to mitigate the woes of farmers" across the country and urged Chief Minister Mamata Banerjee to join the Centre's PM-Kisan scheme.

Mr Dhankhar, who had been vocal about the state government's alleged combative approach towards the Raj Bhavan, termed the economic package announced by the Centre as a "farsighted game changer package".

"Migrants will get FREE RATION for TWO MONTHS: 5 Kg grains per person & 1 Kg chana per family per month Urge @MamataOfficial to adopt PM-KISAN so farmers get assistance through KISAN CREDIT CARDS. Already 70 lac farmers have lost seven thousand crores due to non adoption," he added.

Reacting to Mr Dhankhar's statement, senior Trinamool Congress (TMC) leader and MP Kalyan Banerjee said the tweets show that the governor is functioning as an agent of the BJP and suggested that he contest next year's state Assembly polls on a ticket from the BJP.

"The Hon'ble Governor of West Bengal @jdhankhar1, your tweet depicts that you have become absolutely Central Govt. employee and acting as an agent of your political party BJP. The economic package declared yesterday produces nothing and frustrates the mind of the people of Bengal," he wrote on Twitter.

Alleging that no relief is in the offing for the poor people of West Bengal, the TMC leader said the governor is acting at the behest of Union Home Minister Amit Shah.

"I understand your limitation and you have to carry on the flag of BJP at Raj Bhawan.

"I have never seen a senior advocate like you after becoming Hon'ble Governor has become the conduit pipe of the Central Govt. and for any political party. You can continue your act as per dictates of @AmitShah and the BJP. I invite you to contest ensuing assembly election so that you can get a befitting reply from the people of West Bengal," Mr Banerjee said.

The Chief Minister had, on Wednesday, slammed the Centre claiming that its special economic package is a "big zero" and has nothing for the states.

She had also said the Centre is "misleading people" amid the COVID-19 crisis.

The Bengal government and the Raj Bhawan had, over the past two months, frequently engaged in acrimonious exchanges over the state's handling of the COVID-19 situation.