Farooq Abdullah alleged the leaders, including former minister Naeem Akhtar, are "held up in thanas for no any rhyme or reason". 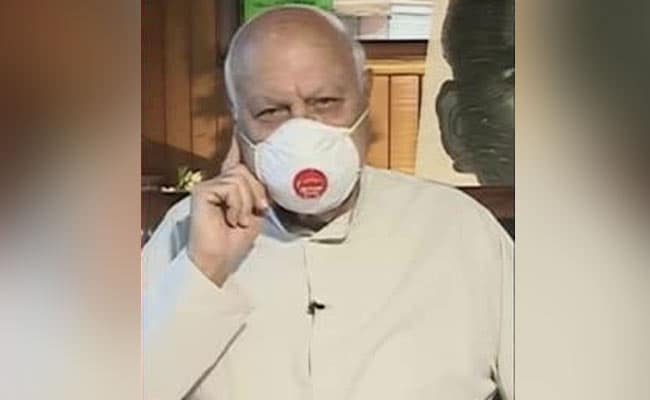 President of People's Alliance for Gupkar Declaration (PAGD) Farooq Abdullah today said the government should immediately release all PDP leaders who were "detained" ahead of the announcement of the District Development Council (DDC) election results if it wants democracy to survive.

Talking to reporters after the first meeting of the PAGD following the conclusion of the polls, Mr Abdullah alleged the leaders, including former minister Naeem Akhtar, are "held up in thanas for no any rhyme or reason".

Besides Naeem Akhtar, Peoples Democratic Party's (PDP) Sartaj Madni and Mansoor Hussain were among 20 leaders taken into preventive custody a day before the counting of votes for the DDC elections began on Tuesday, according to officials.

The PDP is a member of the seven-party Gupkar alliance.

"Those people who are held up in thanas (police stations) for no rhyme or reason must be released immediately if you want democracy to survive," Farroq Abdullah said.

PAGD spokesperson Sajad Lone questioned the need to detain people when the elections were conducted peacefully.

"What is the logic? The election has ended. It has been one of the most peaceful elections in the last three decades. The most non-violent, peaceful election, and this should have ended with something good," he said.

"That it ends with preventive detentions is something totally antithetical to the way the elections have been held in terms of peace, lack of violence while traditionally, in the last three decades, we have seen so much of violence," he added.

Sajad Lone further said, "We condemn these detentions with all the power that we have. And we just hope that after such a great performance of democracy, we are not faced with these arbitrary detentions. They (PDP leaders) should be released immediately. This is our demand. We are here today with the mandate of the people, a majority and a decisive mandate, and we say that they should be released."

The PAGD swept the maiden DDC polls by winning 110 seats, while the BJP emerged as the single largest party with 75 seats after securing the largest vote share in Jammu and Kashmir.

Counting of votes in two of the total 280 constituencies, one each in Bandipora and Kupwara districts of north Kashmir, was deferred till further orders, officials had said.

Asked if the Gupkar alliance will continue in the future, Farooq Abdullah said, "Absolutely. Why do you have doubts about that? We are united and we will continue to be united for what this People''s Declaration stands for."

The MP from Srinagar also urged Centre to restore high-speed mobile internet in Jammu and Kashmir.

"We request the government to restore 4G immediately. It is unfortunate that the people of this state, our children, students, business people are suffering because now everything is online. When the prime minister is talking about 5G, we do not even have 4G. This should be restored as quickly as possible," he said.

Except for Ganderbal and Udhampur, high-speed mobile internet has remained suspended across the union territory since August 5, 2019, when the Centre revoked the special status of the erstwhile state.