Arvind Kejriwal assured that the jail is under his administration and he will not let the agitators in jail face any trouble. the farmers said in a statement. 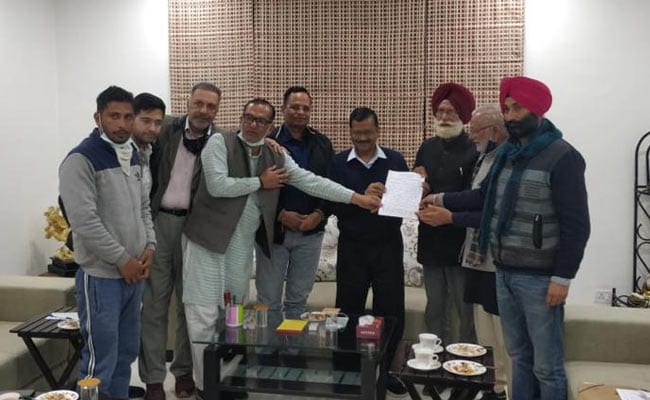 Several farmers have been missing since the Republic Day tractor rally, which had descended into chaos and violence, the Samyukt Kisan Morcha - a front of 40 farmers' unions that is leading the agitation against the three central agriculture laws - said on Tuesday after meeting with Delhi Chief Minister Arvind Kejriwal and Minister Satyendar Jain.

Close to 400 police personnel had been injured in clashes with the protesting farmers after the tractor rally veered off the permitted course. Visuals showed protesters ramming barricades with tractors and attacking the police. A group of protesters had also stormed the iconic Red Fort and hoisted a religious flag at its ramparts, triggering outrage.

The unions reiterated that the violence was part of a conspiracy.

"The leaders of the Kisan Morcha submitted a list of 29 missing youths (noted so far) to the Chief Minister and demanded all humanitarian facilities to the agitators lodged in jails. Farmer leaders demanded a medical board and said that this investigation will expose the police brutality done on farmers. The leaders also demanded a judicial inquiry into the whole case so that the conspiracy of 26 January could be revealed," a statement read.

"Mr Kejriwal assured that the jail is under his administration and he will not let the agitators in jail face any trouble," they added.

On Monday, the Delhi Police had released the names and details of 120 people arrested in connection with 13 FIRs (first information reports) filed after the Republic Day violence. Those arrested include teenagers and senior citizens.

Over two dozen cases have been registered so far over the violence.

Punjab Chief Minister Amarinder Singh, who has been backing the protesting farmers, on Monday launched a helpline to locate those claimed missing. He said the state government had appointed a team of 70 lawyers to assist the farmers.

The Delhi Police has placed multiple layers of barricades and barbed wires at the three main protest sites - Singhu, Ghazipur, Tikri - fortifying its position against a possible influx of protesters from Uttar Pradesh and Haryana into the national capital.

The fortifications were made days after thousands of farmers held a gathering in western Uttar Pradesh after Rakesh Tikait - an influential farmers' leader - had cried on camera saying they had been asked by the local administration to clear the protest site.

"We are being harassed. The Internet, water-supply, electricity - all have been blocked," the farmers said today.

The Delhi Police today downplayed the apprehensions, saying the barricades were bolstered to prevent a Republic Day protest-like scenario.