"Violence Not Solution To Any Problem": Rahul Gandhi On Farmers' Protest

Farmers Tractor Rally: "Take back the anti-agricultural law for the sake of the country," Rahul Gandhi tweeted in Hindi. 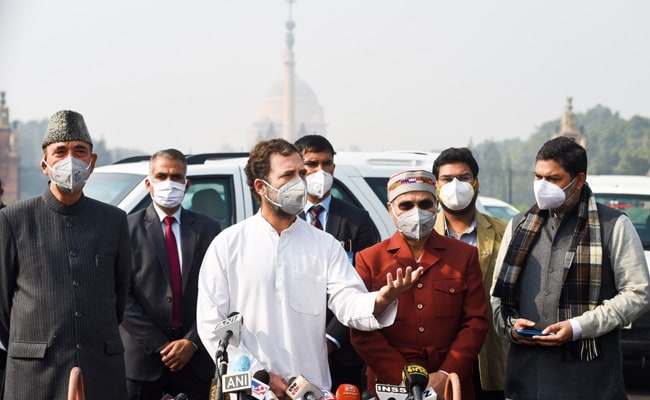 Violence is not the solution to any problem, top Congress leader Rahul Gandhi said today as Delhi witnessed massive protests by farmers over the controversial new agricultural laws. The unprecedented Republic Day agitation saw farmers entering the Red Fort complex and hoisted flags from some domes of the iconic monument.

The police used tear gas and resorted to lathi-charge broke after farmers, ahead of their scheduled tractor rally, breached barricades at several borders of Delhi, deviated from their planned route and forced their way to central Delhi.

"Violence is not the solution to any problem. Irrespective of who gets hurt, it's the country which will suffer. Take back the anti-agricultural law for the sake of the country," Mr Gandhi tweeted in Hindi.

Videos from several border areas of Delhi showed protesters clashing with the police, throwing stones and using sticks and rods.

The farmers protesting against the centre's new farm laws had received permission to hold the tractor rally on Republic Day. Delhi Police, however, had issued a series of restrictions, saying permission was given only to show respect for the farmers' demand. Chaos broke out this morning when the frmers changed their plan and decided to make their way into the capital earlier than permitted.

Opposition parties, which tried to block the farm bills in parliament, had requested President Ram Nath Kovind not to sign on the bills. The bills, they had said, were passed in the Rajya Sabha in an undemocratic manner. The President, however, had given his assent to all three bills.

Farmers fear the laws will deprive them of guaranteed minimum earnings and leave them open to exploitation by big business.

Eleven rounds of talks have been held between the farmers and the government but there been no breakthrough. The farmers have turned down the centre's last offer to put the laws on hold for 18 months while a special committee conducts negotiations.