At Hanumangarh yesterday, Rahul Gandhi said the new laws - passed in September last year amid chaos in parliament - will affect up to 40 per cent of India's population 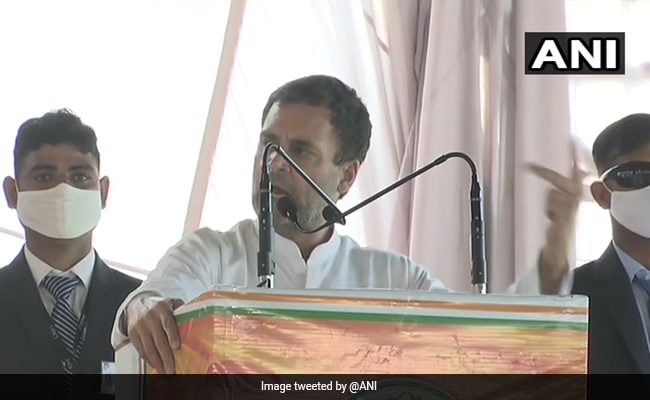 Congress MP Rahul Gandhi will address a tractor rally today in Rajasthan's Ajmer district, in the second leg of a statewide yatra in support of farmers protesting the agriculture laws. He will address thousands of farmers, many of whom will be seated in tractors, at the event in Kishangarh.

On Friday Mr Gandhi began his outreach to Rajasthan farmers with rallies in Hanumangarh and Ganganagar - both districts border Punjab, which has been widely seen as the epicentre of these protests, and are agriculturally rich with the Indira Gandhi Canal cutting through them.

Today's venue - Kishangarh and, later, Roopangarh - have been strategically chosen for a number of reasons, including allowing farmers from neighbouring districts to converge and, potentially, allowing the political ripples of the rally to be felt across the state.

Rajasthan farmers have, so far, been on the sidelines of this protest, which has been led by by farmers from Punjab, Haryana and western Uttar Pradesh, and by the tens of thousands who have been camped around the Delhi borders since late November.

The Congress will hope that Mr Gandhi's presence in the state will galvanise farmers.

At Hanumangarh yesterday, Rahul Gandhi said the new laws - passed in September last year amid chaos and allegations of rule-breaking - would affect up to 40 per cent of India's population.

He also took on the Prime Minister over the India-China border stand-off, saying: "He would not stand before China but threatens farmers. This is the reality of Narendra Modi."

Yesterday's rally was also notable because Chief Minister Ashok Gehlot and former Deputy Chief Minister Sachin Pilot were seen on stage together. Mr Pilot, who was sacked after a failed rebellion, was seated some distance away from Rahul Gandhi.

At Ganganagar, his second engagement of the day, Mr Gandhi repeated his attack on the Prime Minister and Home Minister Amit Shah - accusing the two highest-ranking figures in the BJP of leading a closed network that runs the country - and alleged a nexus with industrialists.

"... remember the family planning saying - 'hum doh, humare doh'. This government has given that slogan a new meaning. The country is run by four people..." he said in parliament this week.

On Wednesday Congress leader Priyanka Gandhi Vadra attended a farmers' mahapanchayat in UP's Saharanpur district, where she told farmers the centre did not understand them or what they stand for, and that "they (the centre) calls farmers anti-national, but in reality, it is them who are anti-national".

The farmers and the centre have held 11 rounds of talks so far, with no breakthrough.

The farmers want the laws scrapped and a legal guarantee for MSPs (minimum support price). The centre says the laws will stay, but has offered an 18-month stay with a verbal assurance on MSPs.

The farmers have said they are open to fresh, and further talks, but have also released a schedule of future protests, which includes a four-hour rail roko across parts of India this coming week.

Implementation of the controversial laws have been paused by the Supreme Court, which set up a committee to negotiate a settlement; the farmers, however, have refused to deal with that committee, citing bias in its constitution.