Punjab Police Promises Action Against Those Who Destroyed Mobile Towers 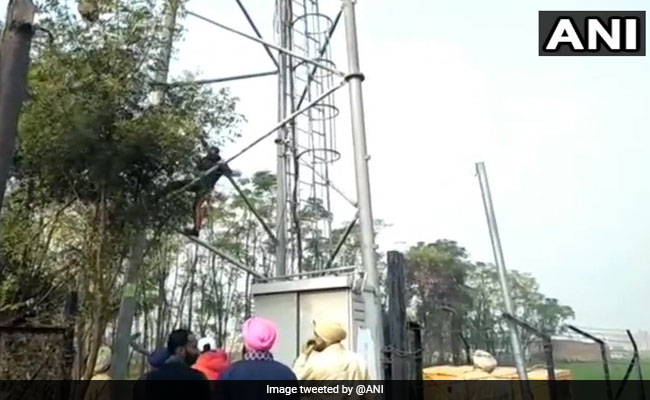 The Punjab Police has said it will take action against "those involved in violence under the garb of democratic right to protest", referring to damage of more than 1,500 Reliance Jio towers allegedly by those protesting for repeal of three farm laws.

"We will take action against those who were involved in violence under the garb of their democratic right to protest. Services at telecom towers, which were disrupted due to violence, is being restored," senior Patiala police officer Vikram Jeet Duggal told news agency ANI.

The statement came a day after Punjab Chief Minister Amarinder Singh directed the police to act strictly against vandalism of mobile towers, which has disrupted telecom services in the state.

Out of Punjab's 21,306 mobile towers of various telecom service providers, 1,561 of Jio's 9,000 have been affected, the state government said on Monday. "So far, 433 towers have been repaired," an official spokesperson said.

Over the past few days, people across Punjab have been venting anger against Mukesh Ambani-owned Reliance, largely believed to be the biggest beneficiary of centre's three laws, which farmers fear would strip them of the Minimum Support Price (MSP) for their produce and phase out the government mandi system.

As a way of protest, power supply to mobile towers was snapped, cables cut, poles uprooted, fibre cables burnt and even site managers who tried to dissuade the protesters were manhandled, media reports show.

The vandalism has continued despite repeated appeals by Mr Singh, who said such disruptions would adversely affect students and professionals operating from home who depend on high-speed internet for their online classes and work amid the pandemic.

On Tuesday, an additional 63 towers of Reliance Jio were attacked after which the company wrote to the Punjab Chief Minister and top police officer seeking their intervention into "incidents of sabotage and vandalism at Jio Network sites" by unknown persons, news agencies reported.

In an appeal to farmers and their sympathisers, Amarinder Singh said use of violence could "alienate the protestors from the masses", which would be detrimental to their movement.

The farmers' bodies protesting in Delhi have also criticised the destruction of telecom infrastructure.

Amid biting cold, thousands of protesting farmers have dug in around Delhi's borders for 35 days now. They demand complete rollback of the three "black laws" and legal guarantee for MSP, but the Centre has said it would only consider amending the laws and give written guarantee for Minimum Support Price.

The two parties now hope to end the impasse at Wednesday's meeting, which would be sixth in the past month.