"No Garlands, Only Shoes": Another Haryana Village Boycotts BJP, Ally

If leaders of the BJP and Jannayak Janata Party enter the village, you will be welcomed with "chhittar (shoes)", not garlands, said villagers in Karnal's Qadirabad in support of farmers' demand for complete rollback of the three recently enacted agriculture reform laws they deem "anti-farmer". 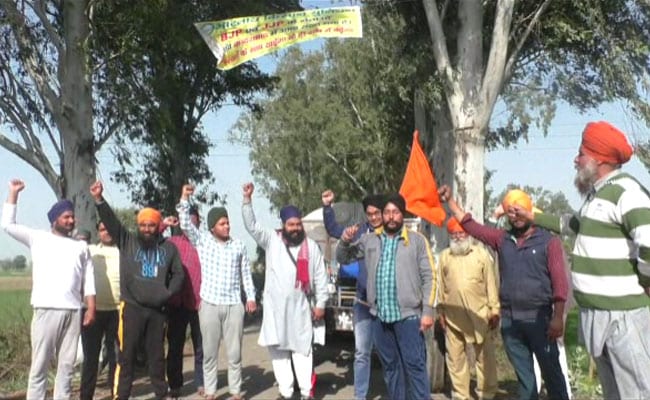 Farmers protest: Villagers in Haryana's Karnal have boycotted all BJP and JJP leaders.

Qadirabad has become the latest in a long line of villages in Haryana that have called for complete boycott of all leaders from state's ruling coalition parties - the BJP and the Jannayak Janata Party (JJP) - including Chief Minister Manohar Lal Khattar and his deputy Dushyant Chautala.

If you enter the village, you will be welcomed with "chhittar (shoes)", not garlands, said villagers in Karnal's Qadirabad in support of farmers' demand for complete rollback of the three recently enacted agriculture reform laws they deem "anti-farmer".

The decision was finalised at a recent panchayat meeting and a banner declaring the boycott was placed on its entrance. "Only those who speak in farmers' interest will be allowed to enter," the banner reads. 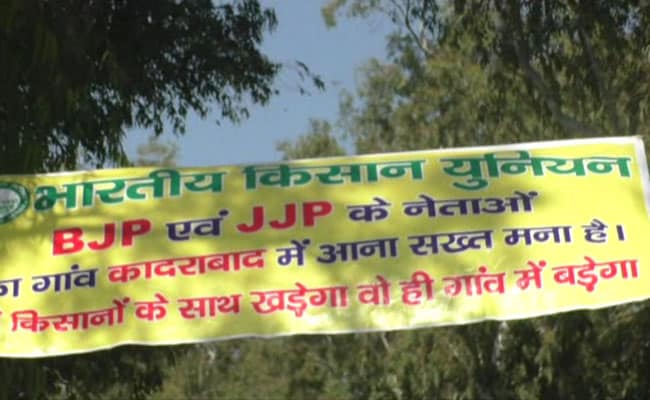 "Only those who speak in farmers' interest will be allowed to enter," the banner reads.

Villagers said they are incensed by the BJP government and its leaders' negative propaganda against farmers, and attempts to create rifts within the ongoing movement for repeal of the "black laws" on Delhi's borders since November 26.

"Those in power are calling farmers terrorists, extremists and Khalistani. They are insulting farmers and the Haryana government is trying to create a divide within the farmers' ranks. They want to impose these laws and ruin us," farmer Gurlal Singh said.

Mr Singh added that the state government is stoking the Satluj-Yamuna Link issue to create a divide among protesting farmers, most of whom are from Haryana and Punjab where the water sharing issue has been a pain point for decades.

Another farmer, Kuldeep, said they have also appealed to other villages in the Indri Tehsil area to boycott BJP and JJP leaders, including Mr Chautala and Mr Khattar.

"This is being done to ensure they cannot insult farmers. We will not let their schemes succeed," he told NDTV repeating that Prime Minister Narendra Modi-led central government should not take farmers for fools.

Monday's boycott comes in the backdrop of similar calls given by panchayats of many villages in Haryana, including Dushyant Chautala's home seat Uchana Kalan in Jind.

Mr Chautala is the grandson of farmers' leader and INLD chief Om Prakash Chautala, who is in jail for corruption. The main voter base of his party, formed ahead of the 2019 state elections, is farmers who have told him to quit and back their demands.

Mr Chautala had earlier said he would quit if he isn't able to ensure MSP for farmers - a key demand.

However, the JJP chief now seems to be towing the BJP line as he recently asked farmers to take the amendment route to end the deadlock, which persists even after five meetings with Union Agriculture Minister and one meeting with Home Minister Amit Shah.

The next centre-farmer meeting is due Wednesday.

Mr Chautala and Mr Khattar have been at the receiving end of farmers' anger over the farm laws, with villagers blocking their convoys and digging up helipads to prevent their visits.

Since the promulgation of the three agriculture laws, which the centre maintains will increase the farmers' income, the BJP has lost allies including Shiromani Akali Dal and Rashtriya Loktantrik Party. Shiv Sena had quit the coalition last year.

The government also faces mounting pressure from Opposition parties, all of whom are backing the farmers' demand. The centre has often accused the opposition of "misleading farmers", a charge denied by the protesters and political parties concerned.