Farmers' Protest Highlights: The farmers' protest will soon become a "national issue", the Supreme Court said, suggesting that a solution be found urgently through negotiations. 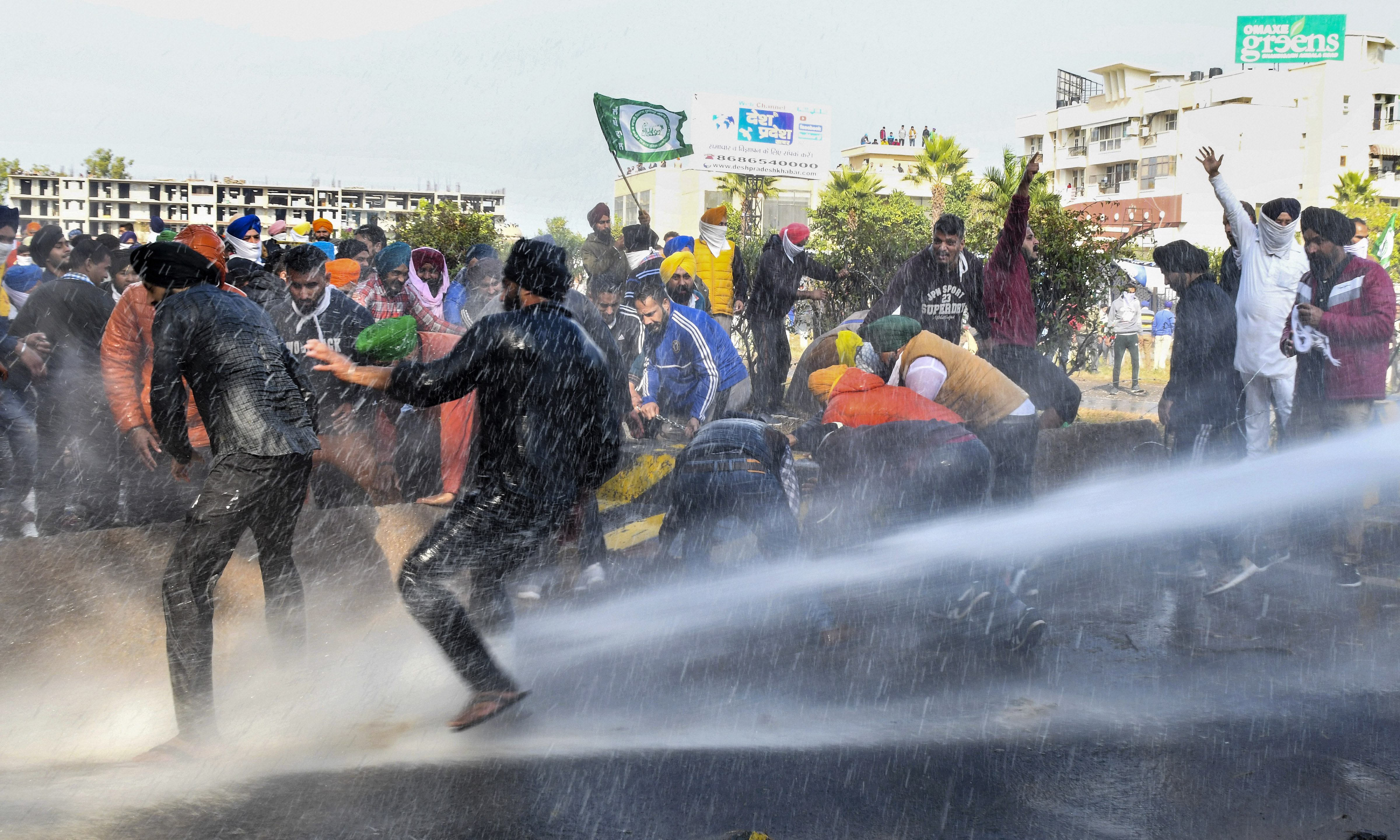 Supreme Court on Thursday suggested a panel be formed with representatives from all stakeholders.

The Supreme Court today acknowledged the right of farmers to non-violent protests and suggested the Centre to put on hold the implementation of three contentious farm laws as it was thinking of setting up an "impartial and independent" panel of agriculture experts and farmer unions to resolve the impasse.

The top court was also of the view that the farmers' right to protest should not infringe the fundamental rights of others to move freely and in getting essential food and other supplies as the right to protest cannot mean blockade of the entire city, PTI reported.

The court has issued notice to the Centre as well as the Delhi, Punjab and Haryana governments and said they will have to respond by tomorrow before winter vacation begins.

Here are the Highlights on farmers' protests:

Dec 18, 2020 00:24 (IST)
Part of Jaipur-Delhi Highway remains blocked
Farmers continued their agitation near the Rajasthan-Haryana border on the Jaipur-Delhi highway on Thursday, keeping the road partially blocked, PTI reported.
Dec 17, 2020 23:21 (IST)
Farmers' body FIFA meets Narendra Tomar; extends support for new farm laws
Amid the ongoing farmers' protest against the new farm laws, yet another farmer grouping FIFA on Thursday met Agriculture Minister Narendra Singh Tomar and extended support for the legislations, PTI reported.
Dec 17, 2020 21:21 (IST)
Another BKU faction reaches Noida; homage paid to "martyrs" of farmers stir
Another group of farmers reached Noida on Thursday and attempted to move to Delhi to join the bigger stir against the new central farm laws but were prohibited by police deployed in a large number near the Chilla border, PTI reported.
Scores of members of the Bharatiya Kisan Union (Ambavat) faction were stopped near Mahamaya flyover on the Noida-Delhi Link Road, with the development obstructing traffic movement on the key route, according to police officials.
Dec 17, 2020 20:52 (IST)
Kailash Gahlot tables resolution in Delhi Assembly to repeal farm laws
Delhi minister Kailash Gahlot on Thursday tabled a resolution in the legislative assembly to repeal the Centre's three new farm laws.
The AAP government has convened a one-day special session of the Delhi assembly to discuss the alleged misappropriation of nearly Rs 2,500 crore in the municipal corporations.
AAP MLA Mahendra Goyal tore a copy of the farm laws during his speech in the assembly.
Dec 17, 2020 19:37 (IST)
Amit Shah holds meeting with Nirmala Sitharaman, Piyush Goyal, Narendra Tomar among others at BJP headquarters
Home Minister Amit Shah on Thursday held a meeting with Union ministers Nirmala Sitharaman, Piyush Goyal and Narendra Singh Tomar amid the ongoing farmers' agitation, PTI reported.
Dec 17, 2020 19:05 (IST)
Farmers' protest: Among 3 main sites at Delhi borders, Singhu emerges as hotspot
The Singhu, Tikri and Ghazipur borders have come up as the most prominent protest sites for the ongoing farmers' agitation, but one location --- Singhu --- seemingly has been receiving more limelight than the others.
While there is no dearth of the fighting spirit among demonstrators at Tikri and Ghazipur either, the facilities at these relatively smaller protest sites are limited, PTI reported.
Dec 17, 2020 18:37 (IST)
Not even one per cent of farmers opposing farm laws: Guj Gujarat Deputy Chief Minister Nitin Patel
Very few farmers are backing the protests at Delhi borders against the new farm laws, and "anti-nationals" have infiltrated the agitation, Gujarat Deputy Chief Minister Nitin Patel claimed on Thursday.
Dec 17, 2020 17:58 (IST)
Delhi Chief Minister Arvind Kejriwal tears up copies of the Centre''s three new farm laws, says he cannot betray farmers.
Dec 17, 2020 17:07 (IST)
20 protesting farmers have died so far; I want to ask the Centre when will it wake up: Delhi Chief Minister Arvind Kejriwal.
Dec 17, 2020 16:44 (IST)
Opposition, those against farmers' and country's progress misleading people on farm laws: Yogi Adityanath
Uttar Pradesh Chief Minister Yogi Adityanath on Thursday said that the opposition and those who do not like the progress of farmers and the country are misleading people on farm laws.
Dec 17, 2020 16:13 (IST)
Singhu, Auchandi, Piau Maniyari, Sabholi and Mangesh borders closed: Delhi traffic police
Singhu, Auchandi, Piau Maniyari, Sabholi and Mangesh borders will remain closed due to the farmers'' protests, Delhi Traffic Police said on Thursday.
The tweet read, "Singhu, Auchandi, Piau Maniyari, Sabholi and Mangesh borders are closed."
Delhi Traffic Police advised people travelling in Delhi to opt for alternative road routes, ANI reported.
Dec 17, 2020 15:01 (IST)
Rajasthan Farmers Still Waiting For Their Loans To Be Written Off: BJP
Amid continued farmers' protest across various states in India, Bharatiya Janata Party (BJP) Rajasthan President, Satish Poonia, on Thursday said that the state's farmers are still waiting for their loans to be written off.

The senior leader, while pointing out that the Ashok Gehlot government had completed two years, stated that it was yet to provide relief to the farmers.

"This government, in my opinion, has failed economically. Rajasthan farmers are still waiting for their loans to be written off. Unemployed people are also waiting for some compensation," the leader told ANI.

Dec 17, 2020 14:41 (IST)
Amarinder Singh Condoles Death Of Sikh Preacher Near Singhu Border
Punjab Chief Minister Amarinder Singh today expressed grief over the death of  Sikh preacher Sant Ram Singh. "Extremely shocked and saddened on learning the tragic news of Sant Ram Singh ji of Nanaksar Singhra wale from Karnal ending his life at Singhu Border in protest against the Centre's Farm Laws. My prayers are with his family and supporters in this time of grief," he said in a tweet.

Police said Ram Singh allegedly died by suicide near the Singhu border on Wednesday. A handwritten note in Punjabi, purportedly left behind by the Ram Singh, says he was unable to bear the "pain of farmers". The note is being verified by the police.

Dec 17, 2020 14:09 (IST)
PM To Address Farmers In Madhya Pradesh Tomorrow Amid Protest
Prime Minister Narendra Modi will address farmers in Madhya Pradesh tomorrow as massive farmer protests near Delhi against three central laws continue unabated.
The Prime Minister's address at 2 pm will be via video link and will be telecast to around 23,000 villages, officials said.

The government's latest outreach comes amid strong remarks by the Supreme Court, which is hearing multiple petitions on the farmer protests on highways near Delhi.

"We acknowledge the farmers have the right to protest. We will not interfere. We will ask the centre if the manner of protests can be altered to ensure citizen's rights are not violated either," the Supreme Court said today. Read


Dec 17, 2020 13:11 (IST)
Protest Must Not Stop Transport: Chief Justice
"We wish to facilitate the talks we are thinking of independent and impartial committee both sides can talk and protests can go on. Panel can give its suggestions. Protests must not stop transport and should not damage properties," CJI Bobde said.
Dec 17, 2020 13:05 (IST)
Both sides have to talk to each other: CJI on protests
"There is protest going on. It is constitutional as long it goes peacful and not destroy properties. The protest has a purpose which can not be achieved by sitting. It has to talk to Govt and each other," CJI SA Bobde said on the protest.
Dec 17, 2020 12:40 (IST)
Traffic disrupted on Delhi's key routes as thousands stay put at border points
There was disruption of traffic movement on key routes in the national capital on Thursday, the 22nd day of the farmers'' protest to demand for the repeal of the three new agri marketing laws.

Farmers camping at Singhu, Tikri and Ghazipur border points have led to closure of several routes in Delhi.

According to the city police, Singhu, Auchandi, Piau Maniyari, Sabholi and Mangesh borders are closed. Commuters have been advised to take alternate routes via Lampur, Safiabad and Singhu school toll tax borders, while traffic has been diverted from Mukarba and GTK road, they said.


Dec 17, 2020 12:37 (IST)
Punjab Farmer Protesting Near Delhi Border Dies Amid Cold Wave
A farmer from Punjab protesting near the Delhi-Haryana border died early this morning, allegedly because of the bitter cold. The 37-year-old man, a father of three, was found dead at a site where thousands of farmers have been protesting for 22 days against central farm laws.

The farmer had three children of ages 10, 12 and 14, according to reports that suggested he died of the freezing cold.

Reports of the death emerged hours after a Sikh priest died by suicide near the epicenter of the protests at the Delhi-Haryana border. Baba Ram Singh, a priest from a Gurdwara in Haryana, had strongly supported the protests and left a note saying he was "angry and pained" at the government's injustice. Read

Dec 17, 2020 10:30 (IST)
Farmer Dies Due To Cold At Delhi Border
Jai Singh, a farmer who was protesting at Delhi's Tikri border, died today. The reason of death is suspected to be extreme cold weather in the national capital.
Dec 17, 2020 08:42 (IST)
Forming New Committee No Solution: Farmer Leaders On Top Court's Suggestion
Protesting farmer unions Wednesday said constituting a new panel to break the stalemate on the three new agri laws, as indicated by the Supreme Court, is not a solution as they want a complete withdrawal of the legislations.

They also said the government should have formed a committee of farmers and others before the laws were enacted by Parliament.

Their assertions came after the Supreme Court indicated earlier in the day that it may form a panel having representatives of the government and farmer unions to resolve the deadlock. Read

Dec 17, 2020 07:53 (IST)
Sikh Priest Dies By Suicide, Leaves Note On Farmer Protests: Officials
The priest of a Gurdwara from Haryana, Baba Ram Singh, who joined the farmers' protest, has died by suicide; he had shot himself. The 65-year-old was at the Delhi-Sonipat border at Kundli, where he reached on Tuesday evening. The area is 2 km from the Singhu border, the epicentre of farmers' protest, which is now on its 21st day. In a note, he said he was sacrificing his life "to express anger and pain against the government's injustice".

"I feel the pain of farmers fighting to ensure their rights... I share their pain because the government is not doing justice to them. To inflict injustice is a sin, but it is also a sin to tolerate injustice. To support farmers, some have returned their awards to the government. I have decided to sacrifice myself," read the note he left. Read