Farmers Protest Live: Five rounds of talks between the government and farmers have failed so far in the last few months. 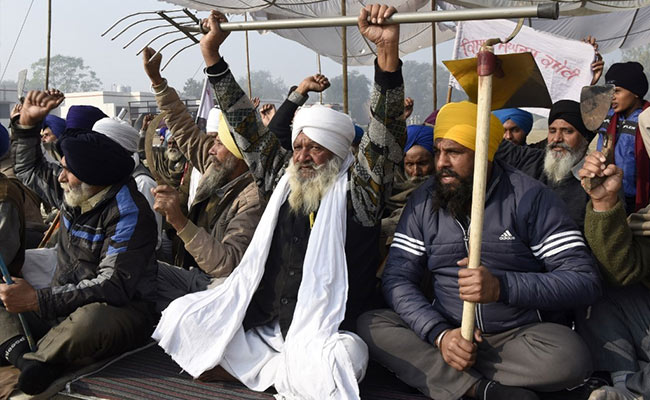 The protesting farmer unions today asked the government to meet and hold discussions on the new farm laws on December 29 (Tuesday). The request came as 40 farm unions held a meeting today to chalk out their future course of action and take a decision on holding talks with the centre as the deadlock continues over the new laws.

They also met on Friday to discuss the government's latest letter inviting them for talks, with some of them indicating that they may decide to resume their dialogue with the Centre to find a solution to the ongoing deadlock over the three contentious agricultural laws.

The agitation near Delhi borders, which began late November, has entered its 31st day. The fresh discussions between the farmers' representatives come a day after Prime Minister Narendra Modi - in his strongest attack on the opposition since the beginning of the protests - stressed that farmers' lands won't be taken away, adding that "some people are spreading lies".

The Prime Minister also released a financial aid of Rs 18,000 crore under the PM-Kisan cash transfer scheme. Five rounds of talks between the government and farmers have failed so far in the last few months.

Here are the Live Updates on farmer protests:

"It was a phone call from Bihar. They were threatening to kill me with arms. I have forwarded the recording to the police captain. They will do what is needed to be done next," said Tikait.

Tikait is at the forefront of protests against the farm laws. He has filed a complaint at Kaushambi Police Station.

Dec 27, 2020 06:02 (IST)
Centre not taking farmers seriously because opposition parties weak: Shiv Sena
The central government is not taking the demands of the protesting farmers seriously because the opposition is weak, said the Shiv Sena adding that though Rahul Gandhi is putting up a vigorous fight, there is something lacking in the Congress' efforts.
Through its mouthpiece Saamna, the Shiv Sena said opposition parties in the country need to come together in order to present a strong front against the Bharatiya Janata Party (BJP)-led NDA government in Centre, and for that the Congress needs to strengthen its leadership, ANI reported.
Dec 27, 2020 05:40 (IST)
Farm laws are in interest of farmers: Dharmendra Pradhan
Union Minister of Petroleum and Natural Gas and Dharmendra Pradhan on Saturday said that the new farm laws brought by the BJP-led government are in the interest of farmers.
Addressing a gathering at Krushak Samabesh in Dhenkanal, he said the steps taken by the Narendra Modi government will help farmers get proper value for their produce.

Attacking the opposition parties, he said attempts were being made to misguide farmers, ANI reported.
Dec 26, 2020 22:50 (IST)
Centre too arrogant to empathise with farmers' problems: Sachin Pilot
Former Deputy Chief Minister of Rajasthan Sachin Pilot accused the Union government of being too stubborn and arrogant to understand farmers' sufferings.
Mr Pilot made the allegations while demanding the repeal of the three recent farm laws against which farmers have been protesting for over a month now, camping at various border points of Delhi.
"Our 'annadatas' have been struggling with determination on the path of truth and justice to protect their self-respect and rights. They have been facing the vicious cycle and atrocities of the central government for the last one month, but the BJP government in its stubbornness and arrogance is unable to understand the suffering of farmers," Sachin Pilot said in a tweet.
Dec 26, 2020 22:03 (IST)
Digvijaya Singh asks Congress members to join farmers' protest
Senior Congress leader Digvijaya Singh asked his party members to "wake up" and join the farmers' protests and raise their voice against the new farm laws.
"Farmers of Haryana, Punjab, UP and Rajasthan are protesting against farm laws because PM Modi is doing injustice to them. Farmers of Madhya Pradesh are innocent but even Congressmen are sleeping. Wake up, join the stir and raise voices against these laws," the former chief minister of Madhya Pradesh said.
Dec 26, 2020 20:00 (IST)
Delhi top cop visits Singhu border, reviews law and order situation
Delhi Police Commissioner SN Shrivastava visited the Singhu border, where farmers have been protesting against the Centre's new farm laws, and took stock of the law and order situation there.
Adequate force is deployed at the border, the top police official said.
"The law and order situation at the Singhu border is normal. There is no anticipation at this stage that something (untoward) will happen, but we are careful and adequate force is deployed at the border. We are in coordination with all agencies and forces. We have been sharing information. The traffic wing of the Delhi Police is constantly sharing advisory regarding the roads that are blocked," Mr Shrivastava said.
Dec 26, 2020 19:12 (IST)

Punjab BJP Ex-MP Quits, Slams Party's Insensitivity For Farmers: Report
Former Lok Sabha MP Harinder Singh Khalsa has resigned from the BJP to protest "the insensitivity shown by party leaders and the government towards the sufferings of the farmers, their wives and children protesting against the three agrarian laws", news agency ANI reported.
Dec 26, 2020 18:52 (IST)

I have left the NDA (National Democratic Alliance) in protest against the three farm laws. These laws are anti-farmer. I have left NDA but won't forge alliance with Congress: Rashtriya Loktantrik Party chief Hanuman Beniwal pic.twitter.com/luToWGTwa7

Dec 26, 2020 18:19 (IST)
Farmers to hold tractor march on December 30
Farmers will hold a tractor march on Kundli-Manesar-Palwal highway on December 30 in protest against Centre's agricultural laws, says union leader Darshan Pal.
"We request people from Delhi and other parts of country to come and celebrate New Year with protesting farmers," he adds.
Dec 26, 2020 17:55 (IST)
Farmer leaders ready to resume talks with government: Rakesh Tikait
The protesting farmer unions have decided to resume their dialogue with the government and have proposed December 29 as the date for the next round of talks, farmer leader Rakesh Tikait said.
The decision was taken at a meeting of Sanyukt Kisan Morcha, an umbrella body of 40 farmer unions protesting at various Delhi border points against three farm laws.
Mr Tikait, a senior leader of Bharatiya Kisan Union, however, said the modalities for the repeal of three farm laws and guarantee for MSP (minimum support price at which the government procures crops from farmers) should be part of the agenda for talks with the government.
"We have decided to hold talks with the government on December 29," Mr Tikait said.
Dec 26, 2020 17:12 (IST)
Farmer Union Leaders Ask Centre To Hold Talks On December 29
The farmers' unions have asked the government to hold a meeting on Tuesday (December 29) amid the ongoing protests against the new farm laws.
Dec 26, 2020 16:51 (IST)

Punjab: Former Lok Sabha MP Harinder Singh Khalsa resigns from BJP "in protest against the insensitivity shown by party leaders & the govt towards the sufferings of the farmers, their wives and children protesting against the three agrarian laws".

Dec 26, 2020 15:59 (IST)
More Punjab farmers head towards protest sites near Delhi
Carrying ration and other essential items with them, several batches of farmers from Punjab headed towards Delhi borders to join the peasants protesting against the Centre's new agriculture-related laws for a month now.
According to farmer union leaders, peasants from various places including Sangrur, Amritsar, Tarn Taran, Gurdaspur and Bathinda districts were headed towards Singhu and Tikri borders. They began their journey despite fog and biting cold wave conditions in many parts of Punjab.
Tractor trollies, cars and other vehicles carrying farmers, including elderly and women, were seen on the Amritsar-Delhi national highway, proceeding towards the borders with the national capital.
Dec 26, 2020 15:30 (IST)
The Rajasthan Teachers Association joined the ongoing protest against the Singhu border against the agricultural laws. A representative of the organization said, "Our organization has organized demonstrations against the government in Rajasthan. These laws will affect the entire middle class." 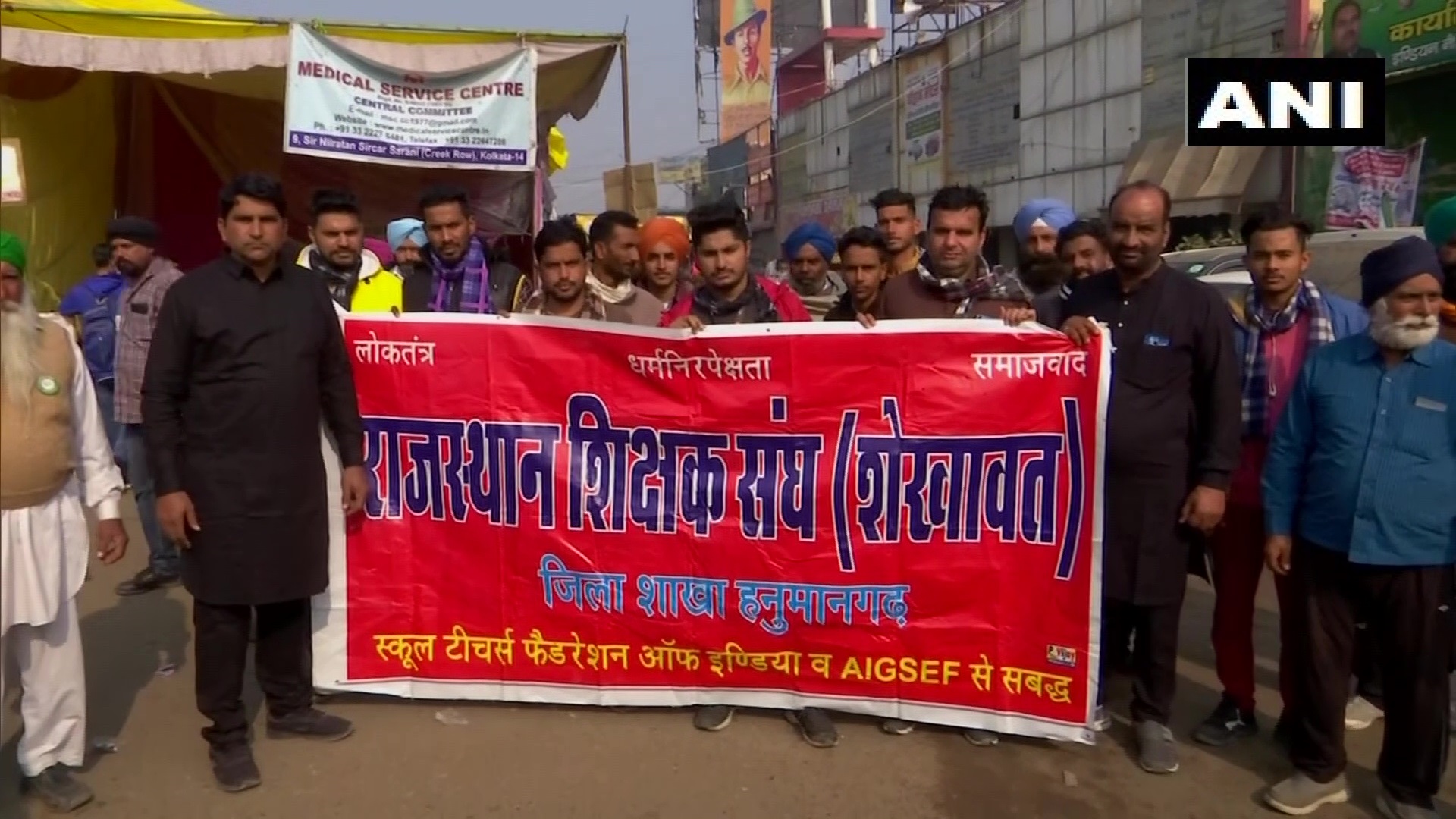 Dec 26, 2020 15:28 (IST)
Farmers of Haryana, Punjab, UP and Rajasthan are protesting against farm laws because PM Modi is doing injustice to them. Farmers of Madhya Pradesh are innocent but even Congressmen are sleeping. Wake up, join the stir & raise voices against these laws: Digvijaya Singh.
Dec 26, 2020 15:00 (IST)
Farmers Attempt To Gherao Punjab BJP Leader's House
Farmers owning allegiance to the Bharti Kisan union (Rajewal) on Friday attempted to gherao the house of a Punjab BJP leader in Jalandhar where a function was being held on the birth anniversary of former prime minister Atal Bihari Vajpayee. Farmers tried to break barricades and police prevented them from doing so, following which a commotion took place in which headgears of some farmers were tossed up, police said.
Dec 26, 2020 14:39 (IST)
"High time you stop making statements only for your political agenda and try to resolve the crisis at hand!," Trinamool MP Kakoli Dastidar said.

.@narendramodi ji, if you are indeed so concerned for our farmers, why are their protests and genuine demands falling on your deaf ears?

High time you stop making statements only for your political agenda and try to resolve the crisis at hand!#ModiAgainstFarmers

Dec 26, 2020 12:31 (IST)
Farm Laws Implemented In MP, No Confusion Over It: Shivraj Singh Chouhan
The three central farm laws have been implemented in Madhya Pradesh and there is no confusion over it, said Chief Minister Shivraj Singh Chouhan on Saturday. "Centre's three farm Laws have been implemented in Madhya Pradesh, and there's no confusion over it," Shivraj Singh Chouhan told ANI. "In all 313 blocks of the state, we will organise training on three farm laws, so our farmers can understand these laws and learn how to benefit from them," he added.
Dec 26, 2020 12:19 (IST)
Farmers Gherao BJP Leaders In Hotel In Punjab
Bharti Kisan Union (Doaba) activists on Friday gheraoed local BJP leaders who had gathered at a hotel here to observe the birth anniversary of former prime minister Atal Bihari Vajpayee, forcing them to slip out from the backdoor under police protection. The protesters claimed that the hotel was owned by a BJP activist who also ran a company supplying cattle and chicken feed. They said they will boycott the company's products.
Dec 26, 2020 11:19 (IST)
Farmers To Hold Meet Day After PM Modi's Fresh Appeal
Forty farm unions will hold a meeting today at 2 PM to chalk out their future course of action and take a decision on holding talks with the centre as the deadlock continues over the new agricultural laws. The agitation near Delhi borders, which began late November, has entered its 31st day. Read Here
Dec 26, 2020 09:15 (IST)
Not Farmers But ''Farm-Grabbers'' May Lose Land: Jitendra Singh
Union Minister Jitendra Singh on Friday said "farm-grabbers" may lose land that has been illegitimately taken away from farmers and not that of the agriculturists. He refuted the false rumours that the farmers will lose ownership of their land under the new farm laws. Participating in a special programme of PM-Kisan Samman Nidhi digitally addressed by Prime Minister Narendra Modi at Nagrota panchayat in Barnoti block, the minister said misgivings were sought to be spread even in Kathua district that the ownership and registry papers of farmers will be cancelled as per the new law.
Dec 26, 2020 09:10 (IST)
PM Modi Addresses Farmers in Virtual Meet
Prime Minister Narendra Modi on Friday released ₹ 18,000 crore to over nine crore farmer families under the Pradhan Mantri Kisan Samman Nidhi (PM-KISAN) programme. With the push of a button, PM Modi enabled the transfer of money at an event that the ruling BJP has made into a big exercise amid the protest by farmers against three new farm laws. "Some people are spreading myth and lies that land will be taken away if farmers enter into contract farming," PM Modi said, alluding to the opposition's attack that farmers won't benefit from the three new farm laws, adding the centre is ready to hold another round of talks with farmers.