Shiv Sena member Anil Desai had asked whether the border of Delhi had been blocked by farmers and whether it was causing inconvenience to the residents of the capital and its neighbours. 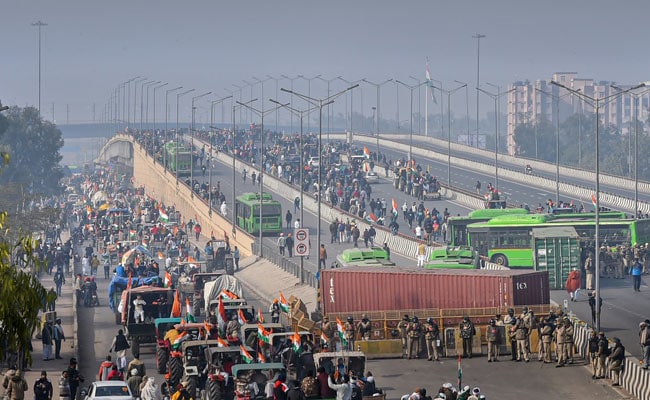 Farmers Protest: Farmers have been protesting since late November against three farm laws.

The farmers' agitation has caused inconvenience to the residents of Delhi and its neighbouring states, the government said in parliament today, in reply to a question on the barricading of the city's borders.

"Delhi Police has informed that Ghazipur, Chilla, Tikri and Singhu borders of the national capital are blocked by agitating farmers and it is inconvenient to the residents of Delhi and neighbouring states. In any agitation, there is financial loss incurred by people and governments," Minister of State G Kishan Reddy said in a written reply.

Shiv Sena member Anil Desai had asked whether the border of Delhi had been blocked by farmers and whether it was causing inconvenience to the residents of the capital and its neighbours.

The police have set up rows of barricades, barbed wire fences and spikes on the roads and dug up trenches at protest sites near Delhi's borders with Haryana and Uttar Pradesh to prevent the protesting farmers from forcing their way in after the Republic Day violence last week.

The government emphasized in parliament that the police were left with no choice but to use tear gas and lathicharge on January 26.

"Delhi Police has informed that at Delhi border, large convoys of protesting farmers in tractor trolleys tried to furiously force their way and go past police barricades to enter Delhi to mark their protest against the recently enacted 'Farm Laws'. They aggressively resorted to rioting, damage to government property and used criminal force to deter public servants from discharge of their duty, thereby inflicting injuries to the on-duty police personnel," Mr Reddy said.

According to him, the farmers also did not adhere to social distancing. "Farmers/protestors gathered in large numbers without face masks amid Covid-19 pandemic. The farmers' actions left the Delhi Police with no option but to use tear gas, water cannons and mild force to control the crowd."

Unprecedented clashes broke out in parts of Delhi during a farmers' tractor rally and a group of protesters stormed into the Red Fort and planted the Sikh religious flag "Nishan Sahib", drawing outrage with allegations of insult to the national flag.

"India was saddened by insult to tricolour on Republic Day," Prime Minister Narendra Modi said on Sunday in his monthly radio address.

Delhi Police Commissioner SN Shrivastava, facing questions on the outsized security measures, said: "I am surprised that when tractors were used, police were attacked, barricades were broken on January 26, no questions were raised. What did we do now? We have just strengthened barricading so that it's not broken again".

The Samyukt Kisan Morcha, an umbrella body of farmer groups, described the digging of trenches and nails on roads, besides temporary internet suspension, as "attacks" organised by the government.

Thousands of farmers have been protesting since November against three central laws that they believe will drastically reduce their income by taking away guaranteed minimum prices for their crops and by leaving them open to exploitation by big corporates.

The government has refused to take back the laws, which it says intend long-pending agricultural reforms, but it has offered to make amendments.