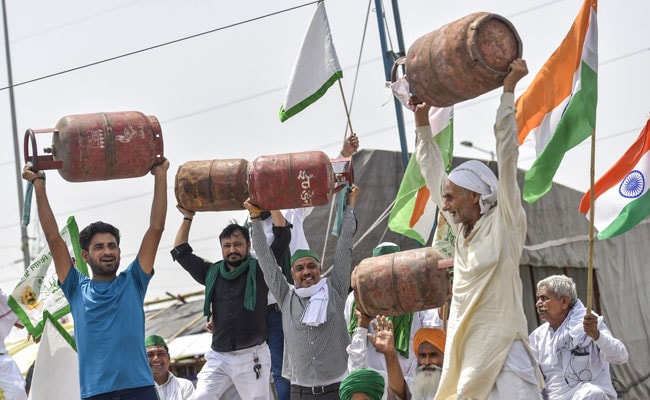 Farmers gathered on the sides of highways to protest the fuel price rise.

Farmers agitating against the new agriculture laws on Thursday came together to raise their voices against the recent price hike of petrol, diesel, cooking gas and cooking oil, demanding that the rates be halved with immediate effect.

Called by the Samyukt Kisan Morcha, the two-hour-long protest from 10 am to 12 noon, saw farmers in different parts of the country gather on the sides of national and state highways along with their vehicles, in an attempt to draw the government's attention towards their plight following the fuel and cooking gas price hike.

Today, farmers protested for two hours against the high fuel prices. We want them to be halved immediately. Protestors brought their motorcycles, cars, tractors and other vehicles and held sit-in protests, said farmer leader Lakhbir Singh.

He added that the demonstrations were held peacefully.

While petrol on Wednesday crossed Rs 100/litre in Delhi and several other cities, diesel is currently priced at Rs 89.59/litre.

Another farmer leader Avtar Singh Mehma said protests were held not just at the Delhi borders where the farmers' protest against the three farm laws is underway, but across several state and national highways in the country.

However, it was ensured that the protests did not block traffic on these roads. Protestors brought their motorcycles, cars, tractors and other vehicles and sat on roadsides.

Housewives also came out in large numbers to participate in the agitation with empty gas cylinders, Mr Mehma said.

While it was too soon to zero in on the number of protestors, demonstrations were held at thousands of places in the country , he said.

The government is made by the people, so it is important that it listens to them. The government should take charge of the fuel prices in its own hands instead of leaving it to the corporations, he said.

As part of the agitation on Thursday, farmers also observed horn baja diwas' during which they honked their vehicles for five minutes to draw the attention of the government, which, according to them, has not been listening to them despite their continued agitation for over seven months.

A call was made to all farmers across the country to come out with their tractors and vehicles on main roads and highways across the country and blow horns so that the government takes note of the protest, Bharatiya Kisan Union (BKU) media in-charge Dharmendra Malik said.

Farmers have been protesting in huge numbers at Delhi's borders since November 2020, demanding the repeal of the three farm laws which, they fear, will do away with the Minimum Support Price system, leaving them at the mercy of the corporates.

The government, however, has been projecting the laws as major agricultural reforms.