The farmer has been identified as Navdeep Singh Hundal, a 26-year-old from Uttarakhand's Bajpur area, who recently got married, according to his fellow farmers

One farmer died after a speeding tractor overturned near the ITO junction in central Delhi, the police said Tuesday, amid clashes with farmers taking out a rally to protest the centre's new agriculture laws.

CCTV footage of the incident showed a blue tractor crashing through yellow Delhi Police barricades at high speed before rolling over twice and coming to rest by the side of the road.

However, some farmers at the site - near the Deen Dayal Upadhyaya Marg - claimed he was killed in police firing and began a sit-in protest.

"This boy.. his name is Navneet Singh. He was driving the tractor... he was injured by a police bullet and died on the spot," Angrez Singh said.

Late in the afternoon farmers finally allowed Navdeep Singh's body to be removed.

The tractor was part of a group from the Ghazipur border that had taken a detour from the agreed upon route for Tuesday's rally, a senior police officer told news agency PTI.

The ITO area saw fierce clashes between farmers and police. A police bus was also hijacked and the cops resorted to lathi charges and firing tear gas shells to control the situation.

In the evening a tense stand-off ensued between a group of protesters and a large contingent of security forces, including police, CRPF (Central Reserve Police Force) and RAF (Rapid Action Force).

Earlier in the day two farmers were injured after another tractor - which was also speeding - overturned near the Chilla border that separates Delhi and Noida.

Unprecedented scenes of violence broke out across parts of the national capital on Tuesday - as the country celebrated its 72nd Republic Day - as a section of farmers protesting the centre's agriculture laws disregarded last night's agreement with the police and stormed into the city. 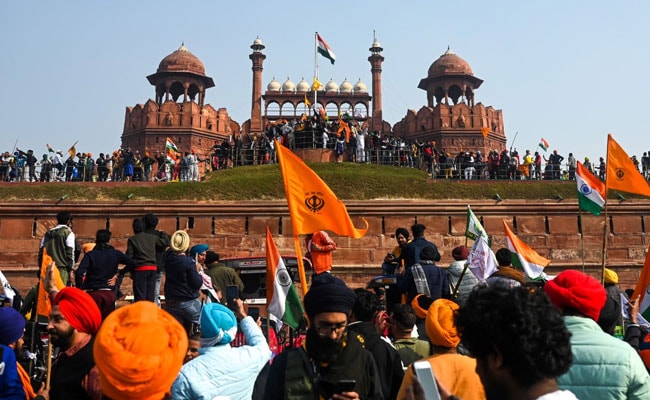 Internet and Metro services were shut down in parts of the city, and Home Minister Amit Shah met with senior security and police officers to review the situation.

The farmers had been given permission to take out their tractor rally after the annual parade at Rajpath, the iconic boulevard at the heart of the city, and along pre-designated routes.

But crowds swelled at the borders at around 8 am - even before the parade started, and hundreds of farmers forced open the police barricades and marched into the city.

As the day progressed groups of farmers broke from agreed routes and clashed violently with cops. Some cops were injured trying to stop the protesters, who were tear-gassed and baton-charged.

By the afternoon, a group of farmers drove their tractors into the Red Fort complex, where protesters gained access to the outer courtyards and ramparts of the iconic Mughal-era fort.

The farmers have blamed "anti-social elements" for the violence and the Samyukt Kisan Morcha, a federation of 40 farmer unions, has dissociated itself from the chaos and appealed for calm.

Punjab Chief Minister Amarinder Singh, from whose state come hundreds of the farmers who are protesting the centre's laws, tweeted in the evening to appeal for calm. Delhi's ruling AAP also issued a statement, saying it "strongly condemns" the violence.