Indian Family Of 4 Freeze To Death Near US-Canada Border

US officials say the dead are a family from India. They are thought to have been attempting to cross into the US, according to media reports. 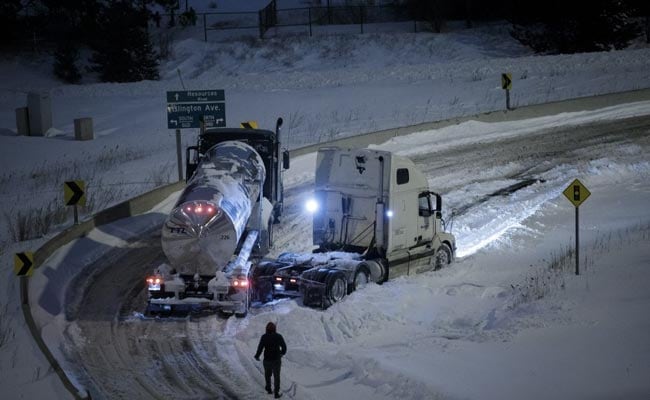 All four bodies were located within 9-12 metres of the border. (Representational)

In a heartbreaking tragedy, a family of four Indians, including a baby, has died from exposure to extreme cold weather on the Canadian side of the border with the US in an apparent human smuggling operation.

Manitoba Royal Canadian Mounted Police (RCMP) on Thursday said that the bodies of four people - two adults, a teen and an infant - were found on the Canadian side of the U.S./Canada border near Emerson on Wednesday.

Confirming the nationality of the four people who died, India's High Commissioner to Canada Ajay Bisaria described the incident as a grave tragedy.

"This is a grave tragedy. An Indian consular team is travelling today from @IndiainToronto to Manitoba to coordinate and help. We will work with Canadian authorities to investigate these disturbing events," Bisaria tweeted.

RCMP Assistant Commissioner Jane MacLatchy shared the discovery with reporters in a news conference on Thursday.

"What I am about to share is going to be difficult for many people to hear," she said, calling it "an absolute and heartbreaking tragedy".

"At this very early stage of the investigation, it appears that they all died due to exposure to the cold weather," MacLatchy said, adding RCMP believe the four people are connected to the group that was apprehended on the U.S. side of the border.

She said all four were located within 9-12 metres of the border.

MacLatchy said that the group was "on their own in the middle of a blizzard" and "faced not only the cold weather but endless fields, large snowdrifts and complete darkness".

An unfortunate and tragic incident. We are in touch with US authorities on their ongoing investigation. A consular team from @IndiainChicago is travelling today to Minnesota to coordinate and provide any assistance required https://t.co/syyA59EoB2

Canadian police said the conditions where the four bodies were extreme and the temperature was 35 below zero degrees with a wind chill.

Police are referring to them as victims, as there are concerns the group's attempted border crossing was facilitated in some way, and that they were left out in the extreme cold, Global News reported.

MacLatchy said work is underway to ID the victims, but at this stage, it appears they all died from exposure to the cold, the report said.

Manitoba RCMP was notified by US Customs and Border Protection on Wednesday morning that a group of people had crossed into the U.S. near Emerson, and that one of the adults was carrying items intended for a baby, but there was no infant with the group.

An immediate search began on both sides of the border, and by that afternoon, the bodies of an adult man, an adult woman, and an infant were found. The body of a boy believed to be in his mid-teens was found shortly afterwards.

The U.S. Attorney's Office for the District of Minnesota issued a release late Thursday afternoon and said 47-year-old Steve Shand of Florida had been arrested and charged with human smuggling in connection with the incident.

Shand was driving with two passengers determined to be undocumented foreign nationals from India, according to the release.

Inside the vehicle, officers found cases of plastic cups, bottled water, bottled juice and snacks in the van. As they were taking the trio back to the border patrol station in North Dakota, officers came across another group of five Indian nationals walking.

They said they had walked across the border and had expected to be picked up by someone. The group said they estimated they had been walking for more than 11 hours, the report added.

One person in the group had a backpack he told officials he was carrying for a family of four they had become separated from that contained children's items such as clothes, a diaper and a toy.

The bodies have been tentatively identified as that family of four, the release from the US Attorney's Office said.

The RCMP said it is working with U.S. Customs and Border Protection and the U.S. Department of Homeland Security.

In a statement, the Canada Border Services Agency said it is also working with law enforcement partners, as well as its American counterparts, on the investigation.

The office of the Minister of Public Safety said in a statement: "We are shocked and saddened by the tragic deaths of four people attempting to cross the Canada-US border, near Emerson, Manitoba. We extend our most heartfelt condolences to their loved ones, and our thoughts are with them at this difficult time."

Officials in both countries said it is more common to see crossings north from the US into Canada. Border crossings into Canada on foot increased in 2016 following the election of former US president Donald Trump.