The police say that they had gone to execute a non-bailable warrant against a trader accused of illegal sand mining and left as the accused was not home. 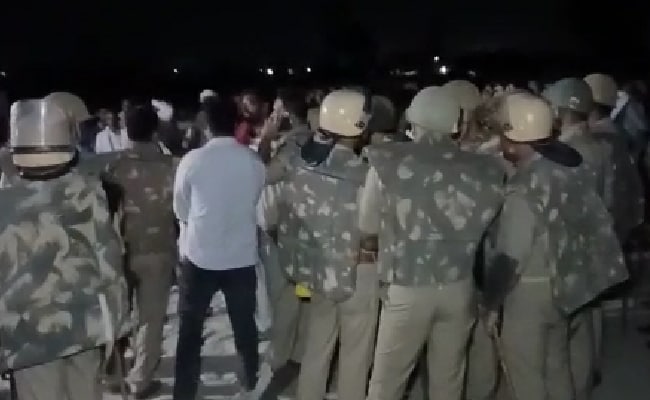 A heavy police presence is in the area to maintain peace.

A family in eastern Uttar Pradesh's Chandauli has claimed that one of its daughters died allegedly after being brutally assaulted by policemen.

The police say that they had gone to execute a non-bailable warrant against a trader accused of illegal sand mining and left as the accused was not home.

The family has alleged that the daughters of the accused were severely assaulted by policemen.

"Hamari badi behen ka hatya kar diye hai police waale (Our elder sister has been murdered by policemen)," a man can be heard in the video.

When asked who hit her, the other woman in the video is heard saying "police". Probed if her sister too was beaten up by police, the woman, who appears in severe pain, says "haan (Yes)".

Two policemen were injured in the incident as angry villagers chased them away. The injured policemen are now in hospital.

"A video is getting viral in which it is being said that a woman is dead. The police raid party, which had women constables as well, went in around 4 or 4:30 and there is video as well. The police did not find the accused at his home and so they left. Around 6, it surfaced that the woman is dead. An inquiry has been ordered. And if a policeman is found guilty, strict action will be taken. Prima facie it appears that the death is due to other reasons. We are awaiting the post-mortem report," said Ankur Agarwal, Superintendent of Police, Chandauli.

"The police officer who led the raid has been suspended and a case is being filed based on a complaint by the family members of the woman who died," Sanjeev Singh, District Magistrate, Chandauli, told reporters.

A heavy police presence is in the area to maintain peace.

"Police has become killer in UP. Innocent civilians are being killed continuously by the BJP government. The death of a daughter in the brutal thrashing of two daughters by the policemen entering the house in Chandauli is extremely sad. There should be a murder case against the guilty policemen and they should get the harshest punishment," tweeted the Samajwadi Party.

On Saturday, the body of a woman was found hanging from the wall of a private hospital in Unnao. The family has alleged that the woman was raped and then murdered.