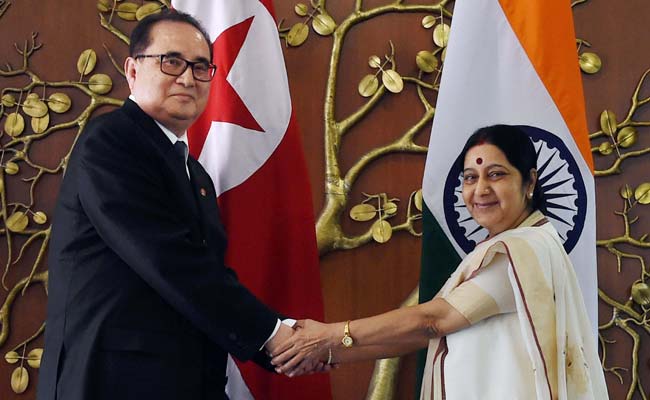 External Affairs Minister Sushma Swaraj, today, conveyed India's security concerns to her North Korean counterpart Ri Su Yong in the national capital, emphasising the significance of peace and stability in the Korean peninsula for the country.

During her comprehensive talks with Mr Ri, who arrived yesterday in a first ever visit by a Foreign Minister from North Korea, Ms Swaraj also assured that India would "positively" consider Korean request for additional humanitarian aid.

The meeting, which comes nearly a month ahead of Prime Minister Narendra Modi's visit to Seoul, also provided an opportunity to the India side to re-assess its relationship with North Korea, which is under heavy economic and other sanctions from the UN and western countries.

She also reiterated India's stand "on the importance of maintaining peace and stability on the Korean Peninsula, including the objective of denuclearising".

Despite sanctions and other multi-national efforts, the international community has not been able to curb the deep ambitions of Pyongyang, which has conducted several nuclear tests.

This has led to tougher sanctions imposed on North Korean banking, travel and trade, reflecting the country's increased international isolation.

"The Foreign Minister level talks were held in a frank and friendly atmosphere where issues of mutual interest including India's security concerns came up for discussion. Ms Swaraj conveyed to her Korean counterpart the significance of peace and stability in the Korean peninsula for India's Act East policy," the Ministry of External Affairs (MEA)said in a statement after the meeting.

Thanking Ms Swaraj for the hospitality extended to him and his delegation, Mr Ri invited her to visit North Korea.

The visiting minister conveyed his country's appreciation for the humanitarian assistance provided by India to North Korea and in this regard sought additional assistance.

India has been extending humanitarian assistance to DPRK, which has suffered food shortages during the last few years as a result of natural calamities. In 2011, New Delhi provided food assistance worth $ 1 million through the World Food Programme.