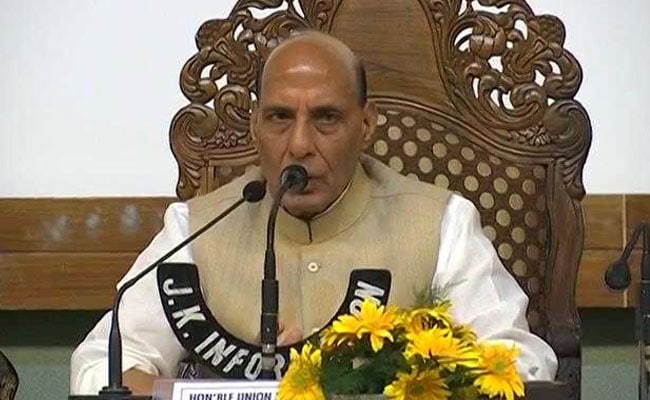 Centre is committed to maintaining peace in Jammu and Kashmir, said Rajnath Singh

New Delhi: If the ceasefire in Jammu and Kashmir is extended beyond Ramzan, it would put security forces on the back foot, especially during the Amarnath Yatra that begins later this month, Home Minister Rajnath Singh was told today.

Mr Singh, who is on a two-day visit to the state, reviewed the security situation in the valley at a meeting that was attended by army, police and other security agencies operating in the state.

Grenade and Improvised Explosive Device (IED) attacks by terrorists were cited as a big worry by the army that briefed Mr Singh about the challenges it will face during the two-month Yatra that begins on June 28.

"These are random attacks that have a huge degree of anonymity so it is very difficult to identify the perpetrator", a senior official present in the briefing told NDTV.

Before any army convoy moves on a highway, not just the road but a wide stretch on both the sides needs to be sanitized. And that's posing the biggest difficulty.

"Before the Yatra begins, we have to sanitise the route and it is very difficult to ensure safety of road opening parties in the wake on these grenade and IED attacks," said the official.

In first 20 days of the Ramzan ceasefire, security forces initiated only four operations while terrorists carried out 44 attacks. Of this, 20 were grenade attacks and the rest random firing in which two security personnel were killed and 23 others were injured.

According to home ministry data, three civilians were killed and 26 injured in clashes with security forces.

Jammu and Kashmir Director General of Police (DGP) SP Vaid also made a presentation at the security review meeting and informed the home minister about the threats intercepted. Mr Singh was told that threat perception to the Yatra is more this year as the situation had got communally charged after the gang-rape and murder of  an eight-year-old girl in Kathua earlier this year.

Protecting convoys of pilgrims during the Yatra would be a big challenge as they travel through many districts, said a senior officer.

Security forces estimate the presence of about 200 active terrorists in the Valley. The state police have sought an additional 225 paramilitary companies (over 22,000 personnel). Last year, the centre had sanctioned 200 companies for the Yatra.

The Home Minister said the centre was committed to ensuring peace and development in the state irrespective of all hurdles.

"India is the world's fastest growing economy. There are forces whose sole objective is to ensure that India's pace and development gets hindered", said Mr Singh.
Comments
Rajnath SinghRajnath in Kashmir