Welcoming the leaders to the party fold, Kailash Vijayvargiya tweeted, "We welcome you to the party. Your entry will strengthen the party." 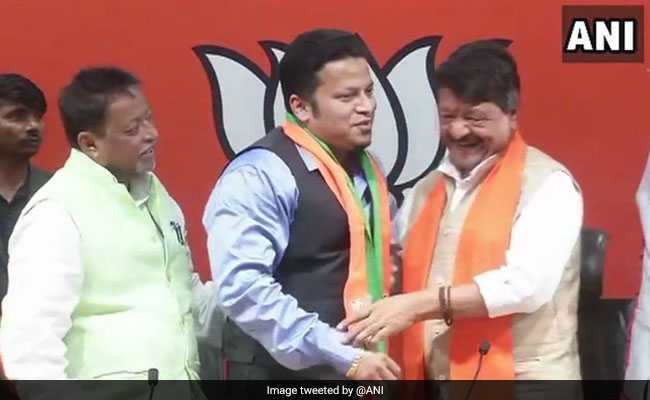 Anupam Hazra was expelled from Trinamool in January for "anti-party activities".

In a boost for the Bengal BJP, Bolpur lawmaker Anupam Hazra, who was earlier with Trinamool Congress, Congress's Dulal Chandra and CPM's Khagen Murmu joined the party today in the presence of senior party leaders, including Mukul Roy and National General Secretary Kailash Vijayvargiya.

Welcoming the leaders to the party fold, Mr Vijayvargiya tweeted in Hindi: "We welcome you to the party. Your entry will strengthen the party."

Mr Hazra was expelled from Trinamool in January for "anti-party activities". The exit of Mr Hazra from Trinamool did not come as a surprise at that time because he was sidelined soon after he was elected in 2014 and was not part of the coterie of Birbhum district Trinamool strongman Anubrata Mondal.

Today, as he joined the party, Mr Hazra said that he felt "politically handicapped in TMC".

"I am a professor of social works. Mamata Banerjee gave me a platform and I am grateful to her for that. I was made politically handicapped after joining (TMC). I was pressurised to do what was told by the party and not what people wanted," he told ANI.

"I am the first Indian MP who exhausted Members of Parliament Local Area Development Division (MPLAD) but not a single inauguration was done by me. That is enough for you to guess, how the administration is running there," he further said.

Bengal BJP chief Dilip Ghosh after Mr Hazra's expulsion in January had said the party was keeping its "doors open". "Today people want to join the BJP You have to wait and watch and see how many more come to us. They may be Mukul Roy loyalists (like Khan) and they may not," Mr Ghosh had said.

The three lawmakers were welcomed to the BJP today at party headquarters in Delhi.

While Dulal Chandra is two-time MLA from North 24 Parganas's Bagda, considered to be a stronghold of Matua community; Khagen Murmu is MLA from Malda's Habibpur.