Exclusive: Why Indian Air Force May Best Chinese Jets In An Air Battle Over Tibet

The lower density of air at high-altitude Tibetan bases prevents Chinese Air Force fighters such as the Su-27, J-11 or J-10 from taking off with a full complement of weapons and fuel. These aircraft would, therefore, enter a fight with the IAF at a severe disadvantage in the event of a conflict.

New Delhi: Indian Air Force fighter jets will be able to effectively tackle Chinese Air Force fighters over Tibet in the event of hostilities between the two countries. A new yet-to-be-released document, "The Dragon's Claws: Assessing China's PLAAF Today" makes the point that the IAF has significant operational advantages over the Chinese Air Force in operations in the Tibetan Autonomous Region which lies to the North of the Line of Actual Control between the two countries.

Written by Squadron Leader Sameer Joshi, a former Indian Air Force Mirage 2000 fighter pilot and produced by Vayu Aerospace, the document is the first comprehensive Indian assessment of the air power balance between India and China since the crisis in the Doklam plateau broke out last month.

According to Squadron Leader Joshi, "Terrain, Technology and Training, will assuredly give the IAF an edge over the PLAAF (People's Liberation Army Air Force) in Tibet and southern Xinjiang, counterbalancing the numerical superiority of the PLAAF, at least for some years to come."

The altitude of China's main airbases "along with the prevalent extreme climatic conditions seriously restrains the performance of aircraft, which reduces the effective payload and combat radius by an average of 50%." In other words, the lower density of air at high-altitude Tibetan bases prevents Chinese Air Force fighters such as the Su-27, J-11 or J-10 from taking off with a full complement of weapons and fuel. These aircraft would, therefore, enter a fight with the IAF at a severe disadvantage in the event of a conflict. The IAF, on the other hand, operates fighters in the Northeast from bases such as Tezpur, Kalaikunda, Chabua and Hasimara which are located near sea level elevations in the plains. This means "the IAF has no such restrictions and will effectively undertake deep penetration and air superiority missions in the Tibetan Autonomous Region." 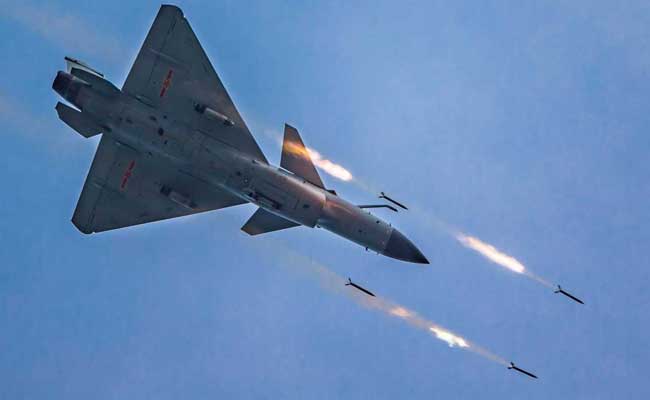 The Chinese J-10B is a lightweight multi-role fighter jet

What's more, the Indian Air Force is thought to be a more nimble force which "focusses much more on experience in air combat and varied weapon delivery, backed by exposure at multinational exercises, to maintain a 'qualitative' edge over its foes." At the same time, both Air Forces are challenged by the mountainous terrain which makes detection of each other's aircraft difficult. In such a situation "terrain hugging fighters, masked by innumerable mountain valleys of the TAR (Tibetan Autonomous Region), will be a major factor for the both sides, delaying crucial early warning to the defenders."

Promoted
Listen to the latest songs, only on JioSaavn.com
What's clear though is that while the Indian Air Force can clearly match or better the Chinese Air Force in the event of a limited air-war, China's substantially larger ballistic missile forces makes the IAF's infrastructure distinctly vulnerable to attack. China also operates a host of relatively advanced surface-to-air missile systems such as the S-300, HQ-9 and HQ-12 "all of which pose a grave danger to the IAF although they are reliant on early detection for success."

In the long run however, China's rapidly expanding Air Force which is now in the process of inducting home-grown stealth fighters such as the J-20 will gain meaningful regional air superiority unless the Indian Air Force gets "an adequate number of fighter aircraft to simultaneously protect the western and north-eastern borders."
Comments
Doklam standoffIndian Air ForceChina Air Force