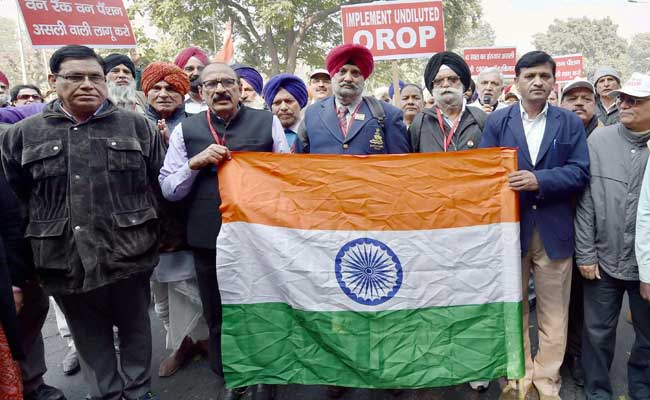 New Delhi: A delegation of ex-servicemen today met Finance Minister Arun Jaitley and submitted a memorandum seeking "corrections" in the One Rank One Pension (OROP) notification, as their protest on the issue entered the 203rd day.

"A five-member delegation met the Finance Minister and told him that the actual OROP has not been granted. The notification issued has serious flaws and we requested him for corrections in it and granting of actual OROP as per the approved definitions," retired General Satbir Singh said.

"The minister has assured us that he will speak to the Defence Minister about our demands," he added.

A group of 100 ex-servicemen including those from Haryana, Punjab, Uttar Pradesh and National Capital Region also protested outside Mr Jaitley's residence and then moved to Jantar Mantar.

"For last 6 months, our ex-servicemen are protesting at Jantar Mantar demanding OROP which has been passed by both Houses of Parliament. But the government has been neglecting our demands again and again. It is our request to give us our real OROP," Arif Ali Khan, one of the protesters, said.

"We had given a notice to the government 21 days ago that we have been protesting peacefully so far. But we have been forced now to go beyond Jantar Mantar. We will now resort to blocking traffic, train and roads if they remain deaf to our demands. We will also disrupt Parliament if need be", he said.

Another veteran Lieutenant Kameshwar Pandey said, "we feel cheated as this is not the real OROP what government has promised. A proper parliamentary procedure must be followed to make any amendments. We just want the government to refrain from such manipulations".