K Chadrashekar Rao stepped up his campaign to cobble up a non-BJP, non-Congress federal front with a visit to Bhubaneswar where he met Naveen Patnaik.

KCR had met Mamata Banerjee in Kolkata in March as well. (File)

Hours before Telangana Chief Minister K Chandrashekar Rao takes a special flight to Kolkata to meet his West Bengal counterpart Mamata Banerjee, her party has said it is all but "natural" that everyone wants to meet her. "When we are looking at 2019, don't be surprised. Obviously everyone wants to listen to her, share their thoughts with her. This is but natural," senior Trinamool Congress leader Derek O'Brien told NDTV.

On Sunday, K Chadrashekar Rao or KCR as he is popularly known, stepped up his campaign to cobble up a non-BJP, non-Congress federal front with a visit to Bhubaneswar where he met his Odisha counterpart Naveen Patnaik.

Mr Rao, 64, has hired a special aircraft for a month for his mission "federal front". His tour through several states will involve visits to shrines, besides meetings with top opposition leaders for a non-BJP, non-Congress alliance. The meetings with Mr Patnaik and Ms Banerjee are part of the first phase of his project. 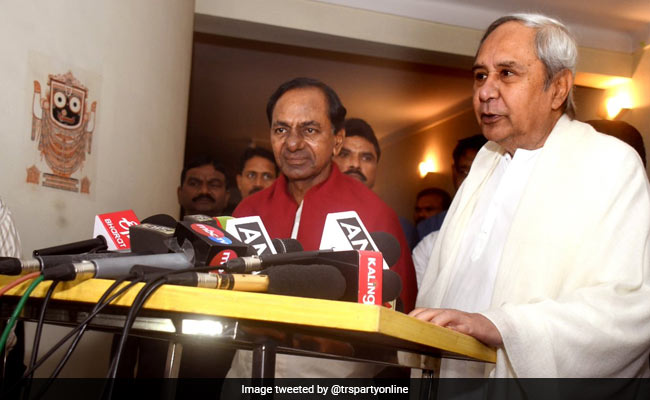 "Mamata Banerjee being one of senior politicians in the country, everybody is talking to her. Don't be surprised," Mr O'Brien said.

KCR had met Ms Banerjee in Kolkata in March as well, soon after he said he was keen to participate in national politics to bring about "qualitative changes" in governance. She had assured him that they could work together. "Sometimes in politics, situations become such that people have to come together to work... We want a strong front but we are not in a hurry," Ms Banerjee had said in March.

After meeting Ms Banerjee, KCR will offer prayers at Kolkata's Kalighat temple. He is expected to reach Delhi at night.

Mr Rao will stay in the capital for the next few days during which he is expected to meet Prime Minister Narendra Modi. Meetings with former Uttar Pradesh chief ministers Mayawati and Akhilesh Yadav are also on his itinerary.