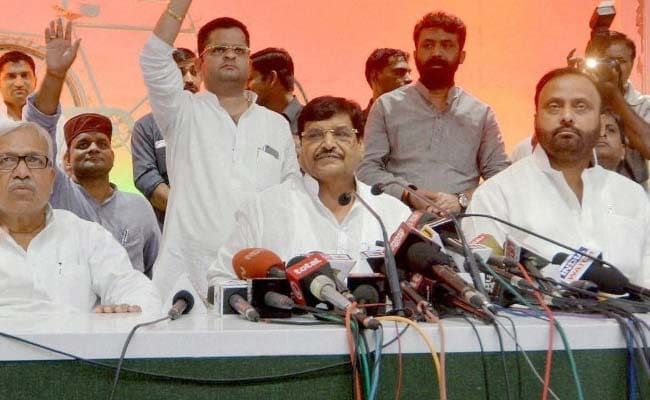 Shivpal Yadav has blamed his cousin Mulayam Singh as "conspirator" who forced him out of Samajwadi Party.

Firozabad earned the sobriquet "Suhagnagari" as its bangles bound families in matrimonial alliances, but this election season the Uttar Pradesh town is witnessing a prestige battle between two members of a family -- Samajwadi Party's Akshay Yadav and his estranged uncle Shivpal Singh Yadav.

As the protracted family feud plays out in the open, the voters in this industrial town, however, seem glued to the national political narrative rather than local issues.

Sensing division of core voters of the Samajwadi Party, the BJP has trusted an ayurvedic doctor, Chandra Sen Jadon, with a ticket from Firozabad.

There are over 17.85 lakh voters who will be decide the fate of six candidates -- sitting MP Akshay Yadav from SP, his uncle Shivpal Singh Yadav from Pragatishil Samajwadi Party (Lohia), Mr Jadon from BJP, Upendra Singh Rajput from Bhartiya Kisan Parivartan Party and Independents Chaudhary Basheer and Rajveer.

The constituency votes on April 23.

In the last assembly elections in 2017, the BJP had recorded victory in four of the five constituencies under the Firozabad parliamentary seat dominated by voters of other backward classes.

Other backward classes, scheduled castes and Muslim reportedly constitute over 70 per cent of total voters.

But the road is not likely to be easy as his estranged uncle Shivpal Singh Yadav, known for his organisation skills, who had quit Samajwadi Party and launched his own outfit, is likely to make a substantial dent in the SP base because of his appeal among ground-level workers.

It has become a prestige battle in Firozabad for Shivpal Singh Yadav, younger brother of SP Patriarch Mulayam Singh Yadav, who has blamed his cousin and father of Akshay as the "conspirator" who forced him out of SP.

Sixty-four-year old Shivpal is trying hard to win the seat and holding meetings and public contact programmes in over 20 villages a day.

The city is grappling with a number of issues such as "complicated" Goods and Services Tax (GST) and poor supply of electricity.

The area comes under Taj Trapezium Zone where the Supreme Court has imposed tight environmental restriction on industrial activities. It is affecting expansion of the industry, a bangle businessman said.

A visit to Gandhi Park in the city shows clear divide among the supporters of the BJP and the SP-BSP alliance. While a group of businessmen and traders are in support of the BJP, another group sitting a little away is supporting the alliance.

The common ground is that both sides are not looking at the local candidate and are evaluating developments at the national level.

"Shivpal ji is a better person than the sitting MP but he is not fitting in the national scene. It is only the SP-BSP alliance which can challenge the BJP at the Centre. We are left with no choice but to support the alliance," Murtaza Hasan, a bangle trader, said.

Amidst clapping and chanting by a group of people in favour of the BJP, he said GST did have an impact on small businesses that are dependent on manual labours.

He claimed that the group supporting the BJP is of industrialists of the area who have no problems in supporting the ruling government as it is the minority and the poor who are suffering.

The impact of GST on the industry is, however, denied by the group backing the BJP.

"The issues are national. About a month back the only issue being discussed was nationalism but now no one is talking about that," Rakesh Gautam, a member of the group, claimed.

He said one has to agree that Prime Minister Narendra Modi is setting the agenda while others are reacting to it.

"We should be the ones complaining about GST but we do not have any complaints. But media goes to autowallas to seek their opinions on GST, who claim that they are facing problems, to build a false narrative against it," Rakesh Gautam said.

Not every businessman is unaffected by the GST. Vinod Kumar Agrawal is a wholesale dealer in the bangle market, a business he inherited from his father and registered it 50 years ago.

"The GST process is so complicated that even lawyers and chartered accountants in Firozabad are not aware of it. We do not have any problem in paying but the process should be simplified," Vinod Agrawal, told PTI.