Election Results 2019: PM Narendra Modi and Amit Shah have so far not indicated a decision on the "Big 4" - Home, Finance, External Affairs and Defence. 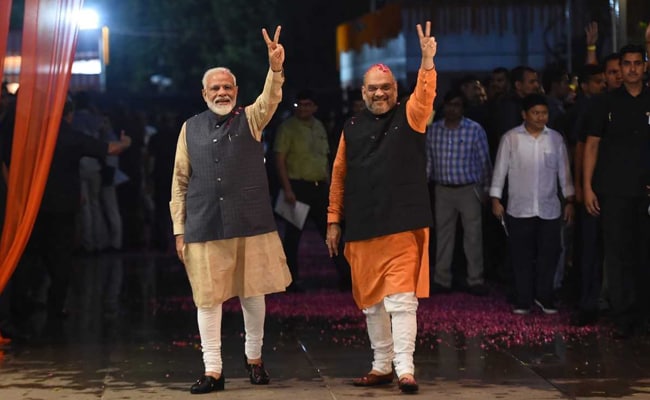 PM Modi and Amit Shah have so far not indicated a decision on the "Big 4". (File)

For the first time after his Everest of a victory, Prime Minister Narendra Modi will meet with his cabinet this evening to discuss the shape and size of his new government.

Sources said a decision has not yet been taken on the date of when Mr Modi, 68, wants to take his oath. He has led his party, the BJP, to 300 seats - improving upon their performance in 2014, a feat not accomplished in Indian politics in 48 years.

In 2014, leaders of the SAARC (South Asian Association for Regional Cooperation) were invited and attended the ceremony- they included Nawaz Sharif of Pakistan.

Leaders from around the world including President Xi Jinping of China have congratulated Mr Modi on his accomplishment.

Mr Modi and BJP president Amit Shah, his closest aide, are believed to be keen on including newer faces in the council of ministers. West Bengal, where the BJP has made a phenomenal career advancement, jumping from two to 18 seats, could get big representation.

The PM and Mr Shah have so far not indicated a decision on the "Big 4" - Home, Finance, External Affairs and Defence.

A big call will be whether to keep senior BJP leader Arun Jaitley as Finance Minister despite his poor health, or assign Railways and Coal Minister Piyush Goyal to the job of leading Asia's third-largest economy. Mr Goyal, 54, had stepped into the role twice when Mr Jaitley was ill. Mr Goyal presented an interim budget before the election and a full budget is due after the new government takes office.

Smriti Irani, who was Textiles Minister, is expected to get a weighty reward for emerging as the BJP's crown jewel of the election season by defeating Rahul Gandhi in Amethi - the constituency held by his family for four decades. Mr Gandhi himself was elected thrice from Amethi. It took Ms Irani just five years to eject him - she ran against him unsuccessfully in 2014, then reversed that yesterday.

"A new morning for Amethi, a new pledge. You placed your trust in development, grateful to Amethi," she tweeted this morning.

Mr Gandhi remains an MP - he also contested the Wayanad constituency of Kerala and won it easily, but the wreckage that is the Congress' result - it won just 52 seats, compared to its worst-ever tally of 44 seats in the last general election - combined with his unceremonious ejection from Amethi has constructed a new crisis for both his leadership and his party.

After Friday's cabinet meeting, the PM will hand in the resignation of the council of ministers to the President of India, Ram Nath Kovind. The dissolution of the 16th Lok Sabha will be recommended. In keeping with procedure, the Election Commission will hand the list of the newly-elected MPs to the President who will then formally constitute the 17th Lok Sabha and seek the swearing-in of the Prime Minister.

Senior BJP leader Santosh Gangwar will be the pro tem speaker and he will sworn along with the new members of Lok Sabha.