With four million registered users, it is the first digital internal feedback system operationalised in the past one year. 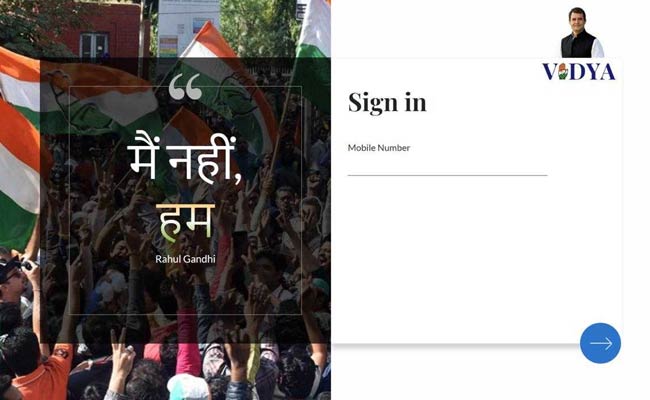 It may be Congress' secret weapon this election season and the key to true democratic power. On Wednesday, Rahul Gandhi's audio message went to at least two lakh Congress workers across Madhya Pradesh, Rajasthan and Chhattisgarh, who were encouraged to name their choice for chief minister to the Congress president through the Shakti app.

With 4.5 million registered users, it is the first digital internal feedback system operationalised in the past one year. Congress insiders confirm that at least the party's Chhattisgarh candidates were decided on the basis of feedback taken through the app or what leaders call 'platform'.

The question - is the top leadership really listening to every input on the feedback network?

"It's one of the factors that we consider when we make decisions,'' a key leader involved in the process told NDTV, emphasising that the old system of party bosses taking decisions at late night meetings with Rahul Gandhi had not been done away with just yet.

However, the fact that this system was used to get feedback on who should be party candidate, has added a degree of transparency to what has been a very stodgy and opaque system till now.

The success of the Shakti network is wholly dependent on how many Congress workers are logged on as members. So the booth worker who was previously only connected to his block or area in-charge now has a means to hear messages directly from Rahul Gandhi, on his mobile phone.

To the criticism about how people were tricking the system, a source told NDTV that every member's feedback is not sought. Only 10% members who are identified as core members are asked for their input.

When candidates were being decided, they first zeroed in on three names and then sent those out to the network of party workers in that region. The poll, insiders say, got them feedback from up to 6,000 workers on each seat. "It wasn't the only factor but in matters of disagreements, this became a way of resolving disputes,'' they said.

However, a Congress leader said the fault with the system is that leaders also figured out how to game the system. "In Rajasthan, many aspirants got their supporters to become members and vote for them,'' he said. It could perhaps be the reason why more than 20 Congress rebels won in the state.

While many are skeptical about this new system, it is a move towards democratizing inner party decisions, a pet theme for boss Rahul Gandhi. Former President Sonia Gandhi seemed to approve when she told NDTV that the system "was good and refreshing.''

The Shakti system is also a means for simple communication. Apart from the "Who should be chief minister message", Rahul Gandhi has been using the app to send regular updates - from his Kedarnath trip to thanking workers for election wins. For instance, when Congress won the Bellary bypoll in Karnataka, which was an extra bonus, he sent a personal message via Shakti to all the workers in that region. During a recent visit to Madhya Pradesh for a public rally, Rahul Gandhi used the app to make personal calls to workers and asked them to meet and interact with him at the venue.

So could some of the members in the network be from other parties? "Maybe five per cent but we don't have any secrets on the network,'' a leader said.