Dussehra 2021: Here’s Why Vijaya Dashami is Always Celebrated After Navratri

Durga Navami: In the lead-up to the Vijaya Dashmi celebrations, several chapters of the Ramayana are also enacted by young actors. 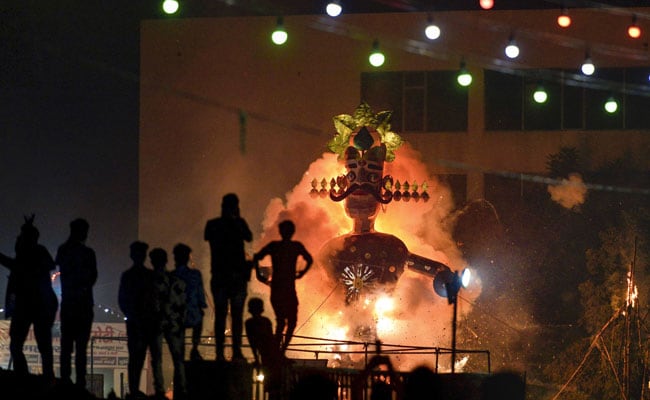 Navratri Navami: Dussehra marks the victory of good over evil.

The festival of nine nights, Navratri, culminates with Dussehra, also known as Vijaya Dashami. The day is celebrated with much enthusiasm across the country. Dussehra marks the victory of good over evil. This year, it will be observed on October 15. According to the Hindu calendar, the Navratri usually falls in the month of Ashvin, or Ashvina.

But have you ever wondered why Dussehra falls on the 10th day of the month Ashvin? According to Ramayana, it was on this day that Lord Ram defeated Ravan, the king of Lanka. Ravan is also known as Dashmukha, means 10 heads. As per belief, each head highlights a distinct quality and they are - Mada (Pride), Ghrina (Hate), Kama (Lust), Bhaye (Fear), Moha (Attachment), Krodha (Anger), Ahankar (Ego), Lobha (Greed), Jaddata (Insensibility) and Irshya (Envy). It is believed that the word Dussehra is derived from two Sanskrit words. “Dasha”  means ten, which in a way represents Ravan. “Hara” means defeat.

Also, on this day, Goddess Durga killed demon king Mahishasura. Durga Puja celebrations are a reminder of the Goddess's victory over evil.

The reason these festivals come in succession is that, according to Hindu mythology, it's believed that Lord Ram worshipped Goddess Durga, on the advice of Lord Vishnu, before embarking on his journey to defeat Ravana.

In the run-up to the Vijay Dashami celebrations, several chapters of the Ramayana are enacted by actors. On Dussehra, the effigies of Ravan, Kumbhkarn and Meghnad are burnt.

In Bengal and other parts of the country, Goddess Durga's idol is immersed in water on the 10th day and people wish each other Shubho Bijoya.

This year, the auspicious occasion of Navratri began on October 7.