Maneka Gandhi said, "I am satisfied to be in the BJP for 20 years. Not being in the executive does not reduce one's stature". 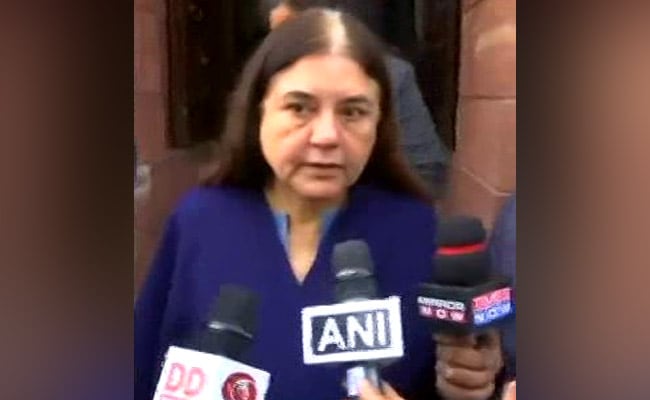 "It is more important that I get a place in the hearts of people," Maneka Gandhi said.

"I am satisfied to be in the BJP for 20 years. Not being in the executive does not reduce one's stature. My first religion is to serve. It is more important that I get a place in the hearts of people," she was quoted as saying by news agency ANI.

"There are other senior leaders who also have not got a place in the executive committee. New people should also get an opportunity. I am aware of my duties and serving the people of my constituency is my first duty," ANI quoted her as saying during her two-day visit to her parliamentary constituency, Sultanpur.

Ms Gandhi -- known to be sympathetic to farmers' protests against the Centre's farm laws -- and her son Varun Gandhi were dropped from the national executive days after the Pilibhit MP's pointed criticism of the events of Lakhimpur Kheri, Uttar Pradesh, where four farmers were run over, allegedly by the son of Union Minister Ajay Mishra.

While Mr Gandhi had also brushed off the omission, saying he had not attended any meeting of the executive committee in five years, a section in the party had said that his comments did not go down well with the top leadership.

"He projected as if the entire fault lies at the doorsteps of the leaders. We are awaiting the investigation report and believe that incident was unfortunate. He should have been patient at a time when the entire opposition is targeting the party," ANI quoted a senior BJP leader as saying last week.

Mr Gandhi had labelled the Lakhimpur incident as labelled as "murder" and demanded accountability. He also wrote to UP Chief Minister Yogi Adityanath, asking for a CBI probe and Rs 1 crore compensation for the families of the dead farmers.

Varun Gandhi's criticism sharpened after being dropped from the executive committee. Minister Ajay Mishra's comment that the Lakhimpur Kheri incident was engineered by Khalistanis, Mr Gandhi said, was an attempt to give communal colour to the event.

"To use the word Khalistani liberally to describe the protesting farmers is not only an insult to the generations of these proud sons of the Terai that have fought and shed blood on our borders, it is also extremely dangerous for our national unity if this provokes the wrong kind of reaction," he said, without naming the minister.

Kerala Journalist To Be Released From Jail Today, Weeks After He Got Bail