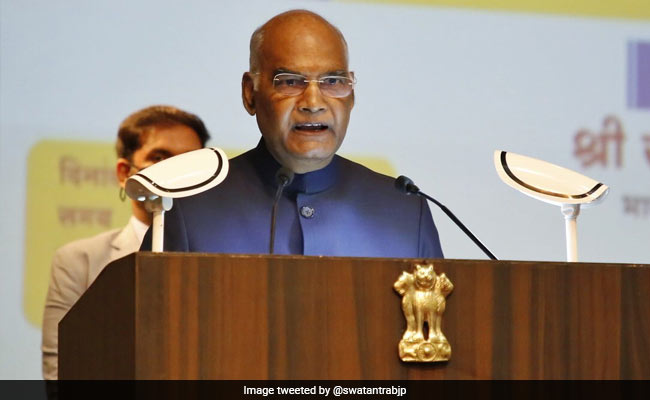 President Ram Nath Kovind on Tuesday laid the foundation stone for a memorial in the name of iconic Dalit leader Dr BR Ambedkar that will be built in Lucknow by the Uttar Pradesh government.

The function took place virtually, with Governor Anandiben Patel and Chief Minister Adityanath, as well his his two deputies, among those in attendance.

The UP government's move to build a memorial dedicated to the architect of the Indian constitution is politically significant with an Assembly election due in just a few months.

President Kovind, whose hometown is in Uttar Pradesh , is the second Dalit President of India and is currently on a three-day visit to the state. Today is the third day.

In a presentation at the function, the UP government said the 'Dr Bhim Rao Ambedkar Memorial and Cultural Centre' would be built on 1.34 acres of land and include a statue of Dr Ambedkar, a museum and a research centre, as well as other facilities.

"Babasaheb used to say that in every democracy it is the government's duty to work for everyone. Various political parties use different slogans - 'sabka saath sabka vikaas', which is the ruling BJP's slogan, for instance - and that is ok. However, I am happy the current government is working for the benefit of everyone," President Kovind said in his address.

Before the President's address, Chief Minister Yogi Adityanath spoke about furthering Dr Ambedkar's legacy. "Whenever one speaks of the poor and the downtrodden in India, Dr Ambedkar's name is remembered as someone who did a lot for their upliftment," he said.

"Keeping Dr Ambedkar's legacy alive is a continuous process... whether it is a memorial in his hometown or in other places he visited. This new memorial will be an extremely modern facility that will help to further the legacy of Dr Ambedkar worldwide," the Chief Minister added.

Dalits account for nearly 20 per cent of Uttar Pradesh's population but are not a monolithic group.

About half are Jatavs - believed to be loyal to Mayawati's Dalit-focused Bahujan Samaj Party, or BSP. Mayawati tweeted Tuesday morning to slam the BJP for "drama and gross deception for the sake of electoral interest".

The four-time former Chief Minister said: "After neglecting and harassing Babasaheb Dr Ambedkar and his crores of exploited followers for almost the entire time in power, now near the elections, UP BJP government will lay foundation stone of 'cultural center'... If this is not drama, what is?"

"BSP is not against setting up of any center... but now doing all this for the sake of electoral interest is a gross deception," Mayawati tweeted.

She suggested that if the state was serious about helping Dalits and other marginalised communities, it should fill "lakhs of government posts reserved for Dalits that are still lying vacant".

The remaining 10 per cent of Dalits in UP - divided into numerous sub-castes like Pasis, Valmikis and so on - are politically more mobile and are being actively courted by the BJP

The courtship has paid off, so far.

In the 2017 Assembly election the party won 68 of the state's 84 reserved seats.

In the 2019 Lok Sabha election, it won 15 of 17 reserved seats; the remaining went to the BSP. Five years earlier the party won all 17.

In a statement to the press on Monday, Mayawati said her party would not contest zila panchayat chairpersons' elections, which are due on Saturday, so it can focus on the 2022 state election.