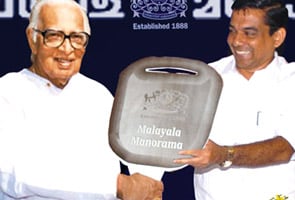 Mathew (93) was a former chairman of Press Trust of India. He is survived by three sons, Mammen Mathew, Philip Mathew and Jacob Mathew and a daughter. His wife had predeceased him. (Read: All about K M Mathew)

Promoted
Listen to the latest songs, only on JioSaavn.com
Mathew had played a key role in making Malayala Manorama as one of the major Indian language daily after he took over the reins of the media house a few decades back.