The Jan Swasthya Abhiyan said the Ayushman Bharat-Pradhan Mantri Jan Arogya Yojana (AB-PMJAY) was based on "discredited" insurance model and demanded that the government abandon plans for it. 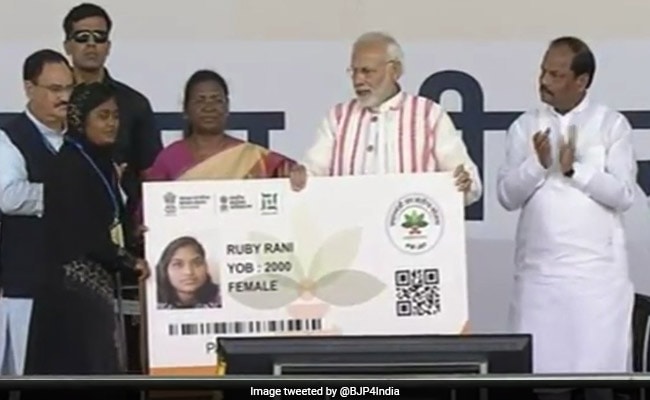 Two days after the Centre rolled out its ambitious 'Ayushman Bharat' scheme, a healthcare network Tuesday expressed concern over the haste with which it has been conceived and announced, and asked the Centre not to view decisions regarding healthcare as opportunities for ensuring electoral success.

The Jan Swasthya Abhiyan said the Ayushman Bharat-Pradhan Mantri Jan Arogya Yojana (AB-PMJAY) was based on "discredited" insurance model and demanded that the government abandon plans for it.

Prime Minister Narendra Modi rolled out the scheme on Sunday from Ranchi, and termed it a "game-changer initiative to serve the poor".

The ambitious scheme aims to provide a coverage of Rs 5 lakh per household annually, benefiting more than 10 crore poor families.

"The JSA wishes to point out that the mere assertion that AB-PMJAY is the largest health protection scheme in the world, does not make it so -- in fact it is entirely misleading. The government's own National Health Mission (NHM) has an outlay of around Rs 35,000 crore, many times more than Rs 2,000 crore allocated for the scheme in the 2018-19 budget. The JSA is deeply concerned about the haste with which the scheme has been conceived and announced, without regard for the negative experience with existing insurance schemes such as the Rashtriya Swasthya Bima Yojna (RSBY)," it said in a statement.

It said AB-PMJAY, or the Ayushman Bharat scheme, is based on the "discredited" insurance model despite massive evidence against the effectiveness of such insurance-based schemes involving major participation of the private sector in service delivery.

There are also serious doubts regarding the viability of the programme given that this year's budget provides only a token allocation for the scheme, the JSA said.

The JSA said public-funded insurance schemes such as RSBY have failed to make even a small dent as regards access to healthcare services. Data about RSBY shows that only a fraction of projected beneficiaries were actually enrolled.

"The even more important concern has been about the quality of services provided and clear evidence that the scheme was being milked by unscrupulous private providers to profiteer, often by doing unnecessary procedures and ignoring real needs," it said.

Noting reports of regular incidents of gross negligence, malpractice and overcharging in private facilities in different parts of the country, the JSA said a majority of facilities empanelled under RSBY were private (4,291 out of 7,226) and the same trend can be expected to continue in the new scheme.

"The Niti Aayog claims that AB-PMJAY will be 17 times bigger than RSBY, but the moot question is: how can we expect the same government to effectively run a much larger scheme when it failed entirely in case of RSBY and several state-level schemes.

"The direction of AB-PMJAY would thus be of, as earlier in the case of public- funded insurance schemes, indiscriminately using public resources to strengthen an unregulated, and in several instances corrupt and negligent, private health care providers," it said.

The body also said there are serious doubts regarding the real intent behind the hasty announcement of the scheme at a juncture when several state-level elections and the national elections are just a few months away.

The scheme has been announced without an adequate provision for its funding in the 2018-19 budget and by the finance ministry's own admission an annual outlay of Rs 12,000 crore will be required to fund the programme, while independent estimates put the figure much higher - at around Rs 50,000 crore.

What has however been allocated in the 2018-19 budget is a pittance in contrast - just Rs 2,000 crore and this raises the suspicion that the announcement regarding the scheme has "more to do with attempts to score a political point rather than a real intent in addressing urgent healthcare needs of the Indian people", it said.

"The JSA urges the government not to view decisions regarding healthcare as opportunities for ensuring electoral success. We note that successive budgets -- especially over the last four years -- have contributed to the serious under-funding of NHM, tasked essentially with strengthening public services.

"We demand that the government abandon plans for AB-PMJAY. The projected annual outlay of Rs 12,000-50,000 crore, as per different estimates, would be much better utilised by investment in expansion of public facilities and creation of permanent public assets," the JSA said.