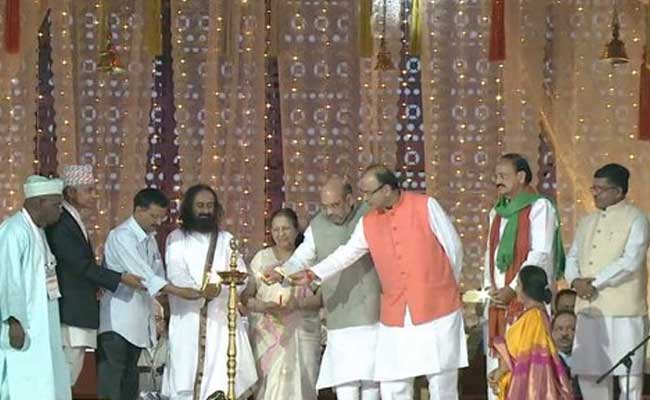 The last day of the Art of Living's World Culture Festival turned into a grand finale with leaders across the political spectrum attending the mega event on Yamuna floodplains.

Art of Living Guru Sri Sri Ravishankar, who had earlier held meditation sessions with Prime Minister Narendra Modi, said he had invited Congress chief Sonia Gandhi and party vice-president Rahul Gandhi too. "I guess they were busy," he said as the two leaders failed to turn up.

In presence of the political leaders, Sri Sri said political parties should not politicise events having a bearing on the country's reputation and suggested that the media has been "harsh" in its criticism of the World Culture Festival.

The reference was to the controversy that had erupted ahead of the festival over the venue, with local farmers and environmentalists contending that the expected 35 lakh footfall will have a devastating effect on the delicate flora and fauna of the area.

As the matter reached the National Green Tribunal, the Congress had pointed fingers at the BJP, questioning how necessary permissions from the authorities were secured for the event.

"We need a certain maturity. I don't mind, but I request all political parties. Whenever such a grand event is being organised, party politics should be kept aside," Sri Sri said, adding that his foundation has already received invitations from Australia, Mexico and other nations which wanted to host the next edition of the event.

"You should come together so that India's prestige on the world stage rises... Other counties are writing in, saying they will help... The international press is asking why the Indian media was so harsh on us," the spiritual leader said.

Calling the event a "Cultural Olympics," he added, "Organising such an event is not easy. But people and artists have come here from all over the world with their own money."

Replying to a query related to his statement that he would not pay the Rs. 5 crore fine imposed by the NGT, he said the green court has made it clear that it was not a fine but compensation to rejuvenate the area.