Harley-Davidson Could Move Work To India Over Trump Tariffs. The Irony

Trade wars might not be good for the United States after all - and they certainly aren't easy. 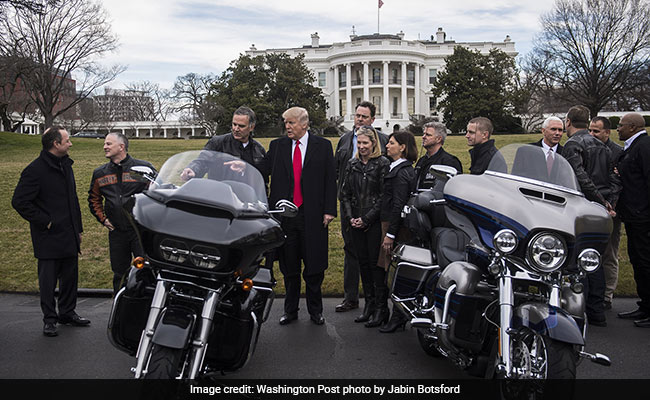 It's true that Trump fought hard for Harley-Davidson, especially so in India. (File)

"Trade wars are good, and easy to win," a confident President Donald Trump tweeted in March, before escalating disputes with a number of countries, including U.S. allies and major Asian economies.

But in fact, trade wars might not be good for the United States after all - and they certainly aren't easy.

The complexity and unpredictability of trade disputes became especially apparent Monday when iconic American motorcycle maker Harley-Davidson announced its decision to move some work abroad in order to escape tariffs that the European Union has imposed in response to the president's earlier tariffs on steel and aluminum. It's still unclear where the company would move the additional work, but Indian observers immediately hoped that their existing Harley-Davidson production hub would see a boost.

In the White House, the announcement was expectedly met with less excitement. "Surprised that Harley-Davidson, of all companies, would be the first to wave the White Flag," Trump tweeted in response. "I fought hard for them...."

It's true that Trump fought hard for Harley-Davidson, especially so in India. Targeting the country over allegedly unfair trade practices earlier this year, the president went all in, even threatening to stop trading with the nation of 1.3 billion people entirely. One of the president's core complaints? U.S. exports of Harley-Davidson motorcycles there, on which India used to impose whopping 60 to 75 percent tariffs.

"I'm not blaming India. I think it's great that they can get away with it. I don't know why people allowed them to get away with it. But there's an example that's very unfair," Trump said in February. Trump's complaints ultimately resulted in India agreeing to slash the tariffs to 50 percent, even though the president still wasn't happy.

The problem with his criticism was that it didn't add up - and that the real reason U.S. jobs may now move to India or other parts of the world involves the trade disputes he has unleashed himself.

"Motorcycles" don't even merit a mention in the Indian Ministry of Commerce and Industry's data on exports to the United States, as my colleague Annie Gowen wrote in February, so the tariffs Trump has threatened to impose would essentially have almost zero impact. And the vast majority of Harley-Davidson motorcycles sold in India are produced in the country, so the Indian tariffs don't apply to them anyway.

There are legitimate reasons to be concerned about India, which has been criticized for its increasingly protectionist positions.

But in regard to the Harley-Davidson motorcycles that Trump cared so much about, the man occupying the most important office in the world was trying to fix a problem that didn't really exist at the time.

India became the world's largest producer of motorcycles last year, and foreign high-end companies increasingly regard it as a core production hub for their markets. Outside the United States, Harley-Davidson already has or is constructing facilities in Brazil, Thailand, Australia and India, with its site in India producing a number of models for the European market.

Harley-Davidson did not immediately respond to an emailed request for comment Tuesday. In its announcement Monday, the company said only that it may move some work abroad to avoid E.U. retaliatory tariffs on American products, but it did not indicate where those resources would be added.

If Harley-Davidson were to follow through on its plans, Trump's trade disputes would have done little to save Harley-Davidson's U.S. jobs. In fact, they may end up helping to move them to the country he wanted to defend the company against.